In many homes the stairwell is a focal point – grand with beautiful banisters.  But in a lot of  old, hardworking farmhouses the stairwells weren’t there for looks.  They were built to serve a purpose – point blankly to get you from one floor to the next.   I would say our stairwell falls into this latter category – but you know what? I’ve grown to love them.   Steep and narrow, I’m pretty sure they are not up to current code by any means.  My sister has threatened to buy my kids toboggans to take a ride down them.    But like most things I love about this house – they have charm.  The middle of each step is worn down from a 100 years of use; four generations of Almens walking up and down them countless times.  They change with the seasons as the house shifts from the ground freezing and thawing.  In the winter the second step from the top squeaks and in the summer it switches to the fourth step.  I learned to memorize this quickly in order not to wake a sleeping baby and I’m sure one day my kids will remember this too when they are teenagers trying to sneak in past curfew.

Because the stairs are so steep I’m sure quite a few little Almen butts have  taken a bumpy ride down them.  To help with this grandpa Ardell had stapled on carpet remnants many years ago.  To freshen up the stairwell I removed these well used remnants and gave the stairs a quick coat of paint.  I cheated and used a light tan wall paint I already had.  On stairs I would think you would usually want to use a floor paint but I knew I wanted to install a stair runner and we wouldn’t be stepping on the painted part too often so its held up well.  After I painted I stapled on a piece of thin carpet pad to each stair tread.  Next it was time to pick out the runner.  I wanted something that would be fun, inexpensive and have a little bit of texture to it to help keep us from slipping off those narrow treads.   I found a Dash and Albert runner on Wayfair that fit the bill.  It was  around Christmas time last year so they were having good sales and free shipping.  I had to buy two to make it the entire length so I made sure to butt them up to each other under a stair tread  to hide the seam.  Also, did I mention this stair well was narrow?  Well it is.  And to avoid covering the entire stair with runner I had to strategically fold it.  After some head scratching and improvising it all worked out and a pneumatic staple gun helped the whole process go quite quickly.   The colors and pattern really help cheer up the enclosed staircase and I think it has just the right amount of farmhouse charm.   Even better the colors matched the existing wall paint color which I was hoping to keep.

Here is a before picture: 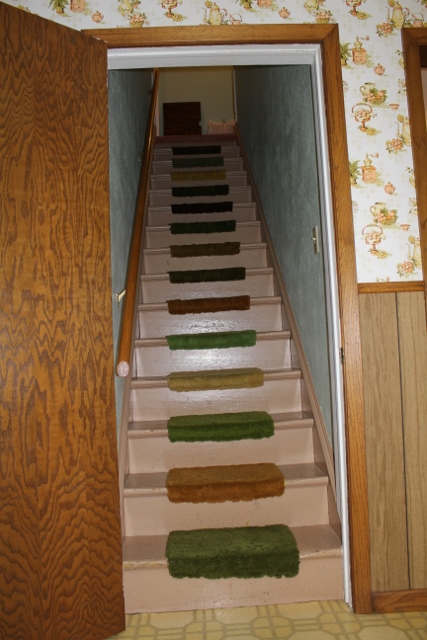 And here is my cheerful staircase now: 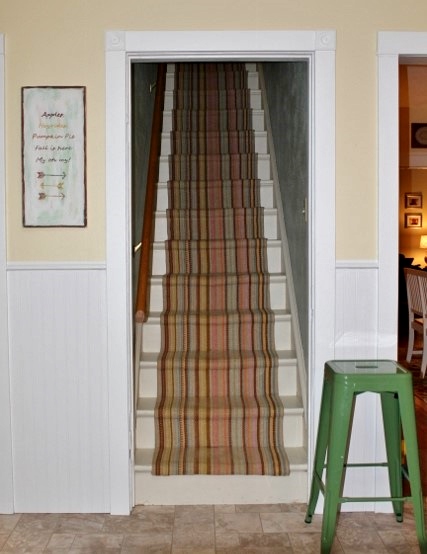