Disclaimer:  This post is going to be a long one cuz I’m so crazy happy with how the kitchen turned out.  With 4 kiddos most of the work got done after bedtime and we would work well into the night.  We literally poured our blood sweat and tears into this one and I couldn’t be more proud.

When we first moved in to our home we painted almost every room in the house right away. The kitchen though I didn’t touch for about 9 months.  I wanted to take my time to really think about what I wanted.  This was going to be our biggest project yet and I wanted to do it right.  Moving into a home that has been in your husbands family for over a 100 years, you tend to put a bit of pressure on yourself to make the family proud.

Below are some before pictures.  The kitchen was actually an addition that was added on in 1970’s.  It is such an awesome space – I’ve never had such a big kitchen – I would say at least a 10 butt kitchen 😉

Here are a couple before pictures. These were taken right when we were moving in. 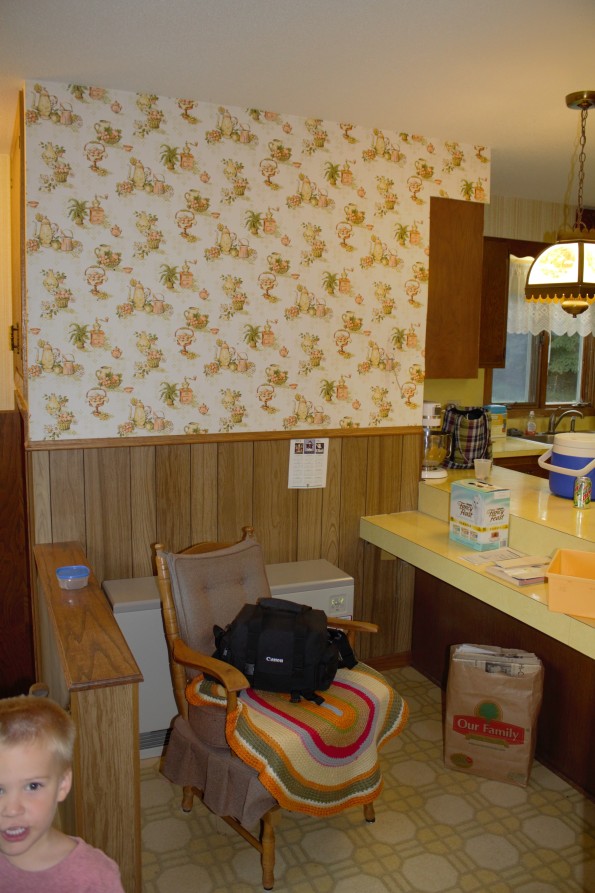 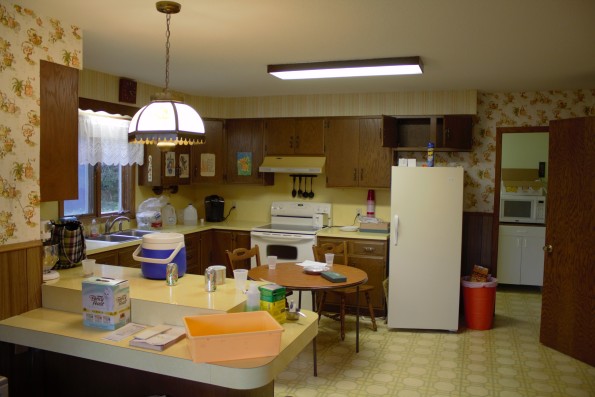 And here are the after pictures. 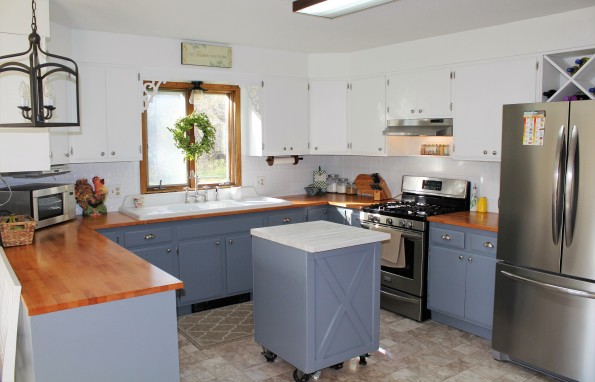 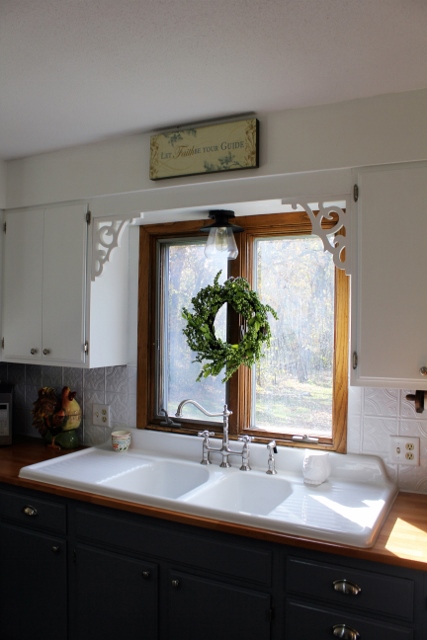 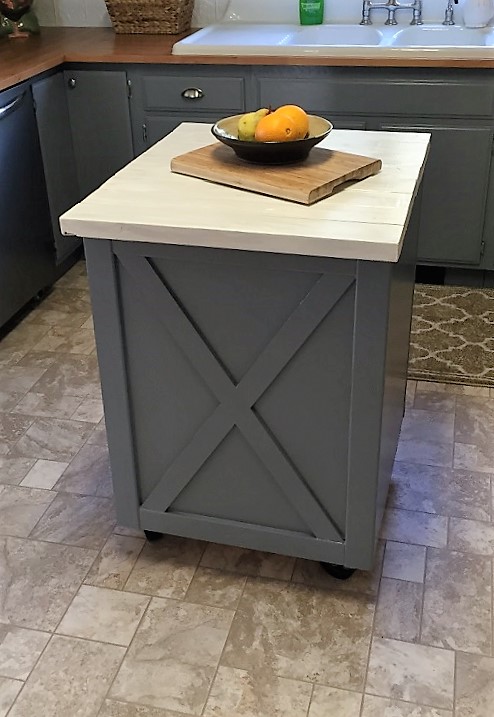 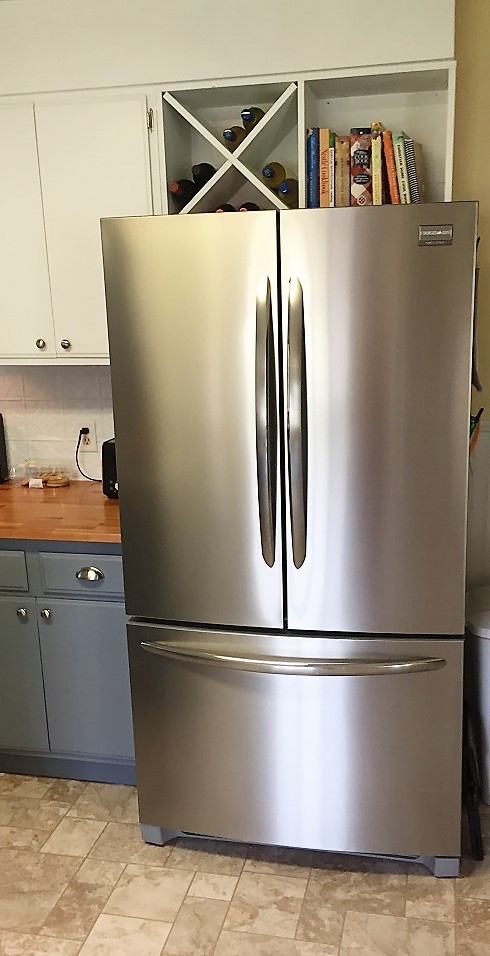 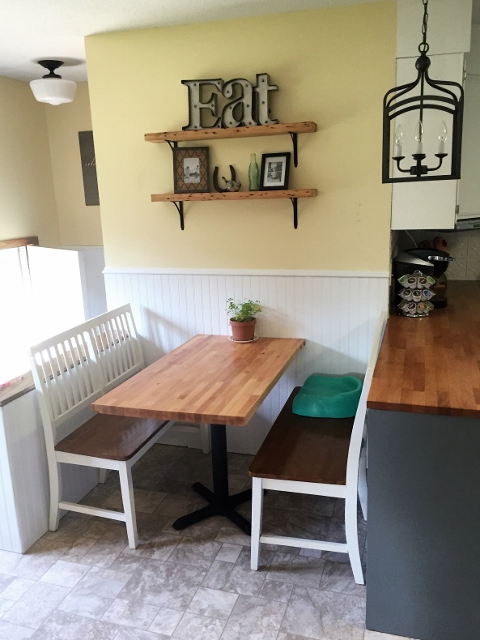 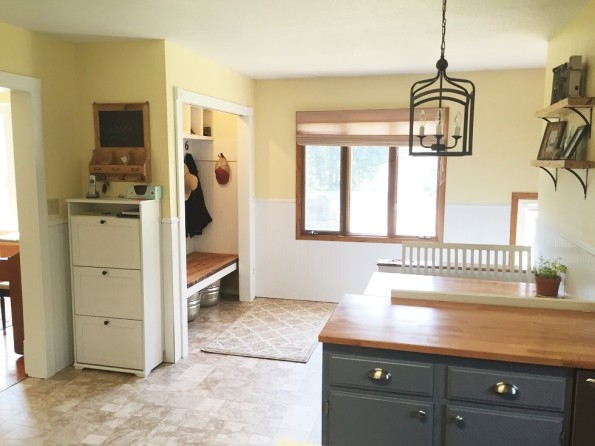 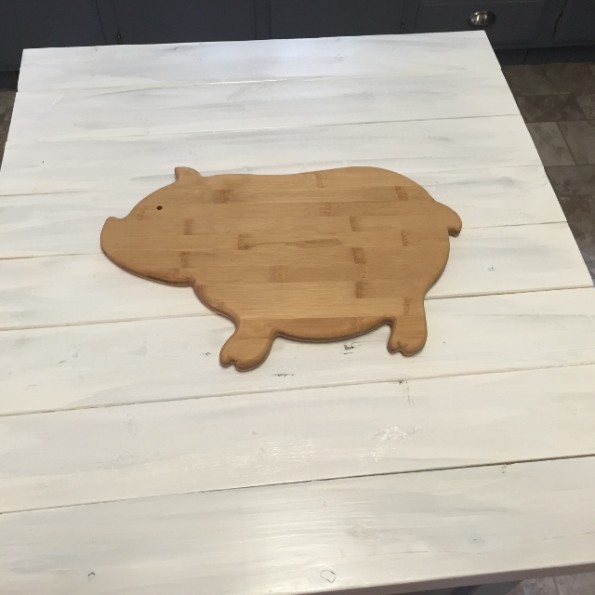 I wanted a farmhouse vibe that would match the rest of the house.  We had a pretty strict budget and most of that went to the flooring and appliances so I got creative with the rest.  Here’s the lowdown on what we did:

* The lower level countertop around the peninsula was removed.  It couldn’t fit all 4 of my kids around it and I knew I could get better use out of the space.   I created a booth table out of some butcher block and metal pedestal stand I bought on Amazon and then paired it with some benches I already  had.  The end result was the perfect place for my 4 kids to eat breakfast, have an afternoon snack or do some homework.

*We had the flooring replaced  and purchased new appliances.  This was the first time this house would ever have a dishwasher!  I had gone a year washing dishes by hand and I actually did a happy dance the day it was installed.

*We had to take a cabinet out to get the dishwasher in so I reused it for our island.  I just sawed off the toe kick area, attached some cool vintage looking wheels and trimmed out the back with a barn door style.  I had about $0 left in my budget at this point so for the countertop on the island I took some spare 2×4’s we had and attached them and painted them with a white wash.  A couple coats of poly and it was perfect.

* We removed the upper cabinet above the sink to accommodate the bigger fridge. To fill in the blank spot I built a new wine rack/cook book shelf.  I believe every kitchen should have a wine rack 😉

*The cabinets were in good shape and new ones were just not in the budget so I decided to go with a two tone paint on them; white on top and a steel blue-gray on the bottom.  I used Cabinet and Door paint in basic white for the top and Sherwin Williams Serious Gray (although I would call it more a steel blue) for the bottom.  Having the darker color on bottom has been great to mask all the little paw prints from my kids. I’ve used Cabinet & Door paint before and have always been impressed by how smooth it goes on and how chip resistant it is.  This was my first time using Sherwin Williams on cabinets so I’m hoping for good results.

* We installed bead board over the dark paneling.  I  have to give my husband the credit on this idea.  My original intent was to remove the paneling and just do paint however the paneling had so much glue on it that it really damaged the drywall behind it.  My husband came up the beadboard idea.  Being a little on the stubborn side, I insisted I could patch the walls up nice and pretty.  After one afternoon of trying to patch I called my hubby up and said “maybe we should head down to Lowe’s for some of that beadboard.”

*Old countertops were replaced with butcher block which we purchased at Ikea.  We spent a total of $400 on the materials for the countertop and cut and installed them ourselves.

*The sink.  Ahhhh…. excuse while I take a moment and stare at it all dreamy like.  I kind of love our sink.  So much so it might just get its own post with a review and more details.

*For the backsplash I was originally thinking subway tile.  However I knew that when I took down the formica backsplash that was glued onto the drywall  I was going to run into more work than I wanted at this point.  So instead I opted for a white tin backsplash that I could install right over the existing formica.  I think i went through a box of bandaids cutting the tin but it was worth it and I was able to finish it in an evening.

*Lastly we replaced the lighting over the island, the sink and in the entry way.   I changed my mind so many times on exactly what lighting I wanted.  Budget is king though and it finally came down to some great deals I found on Amazon.   I kind of went with a mix of different styles I like.  Hanging lantern above the island, school house style in the entry and barn light above the sink.  Using a bronze color on all of them kept the look cohesive.  I’m still deciding what i want to do for the main florescent light.

Whew! So I think I covered all of it.  I warned ya – it was a long one but I hope you like it and can draw some of your own inspiration off of it.   If you have any questions or would like more details on anything we used feel free to leave a comment or send me an email.

And P.S.  Don’t worry.  I did clean up all the blood, sweat and tears.