When  I was younger, as most kids, I had pretty active imagination.  I remember my favorite game was to pretend I was a gymnast. I would catapult and do flips off my grandma’s davenport (yes that’s what she used to call her couch and yes she was super lenient with me).  I would also jump off the doghouse and throw my hands back in the air pretending I had just landed a huge flip and was doing the “pose”for the judges. (p.s. I always got a perfect 10:) )

I’ve come to realize that I haven’t quite outgrown my imagination.  Except now apparently I like to pretend I’m a HGTV host revealing their latest makeover.  Jack was so excited to see his room.  But I wouldn’t let anyone in there until I had all my built and set up.  And when I finally had the room all  put together I let just Jack in and took about a 1000 pictures to document his reaction – thank goodness he liked it.

Here was the last piece I finished up.  It is the base for his bed. If you want to build a similar bed go to http://www.ana-white.com/ and  you can find tons of different plans.  I actually bought her book so I used the plan from that – I don’t see the exact same plan on her website but there are many similar ones like this to choose from.  Really this room could be called the Ana White room – all my furniture plans were from her book or her website. 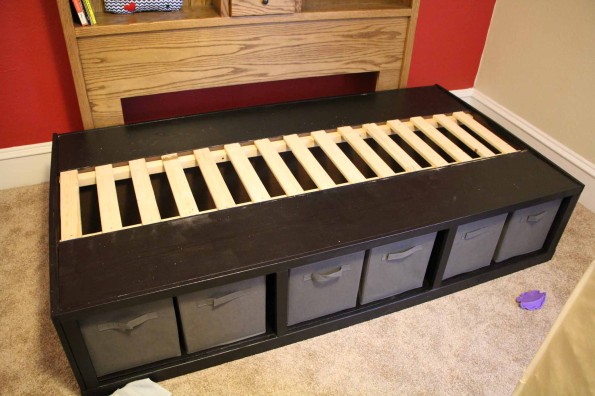 When I started this room I knew that red was going to be a predominate color because it was Jack’s favorite. I also knew I wanted to incorporate the headboard that Matt and I had bought when we first got married.  The headboard is meant for a full or queen size bed but I wanted to use a twin mattress.  We already had one and I thought it was more important for him to have more room to play at this point than a bigger bed.  The bed base has shelving on both sides so when he gets older we can flip it, put in longer slats and use a full size mattress if he wants.

So here is the room finally finished. The bed all set up: 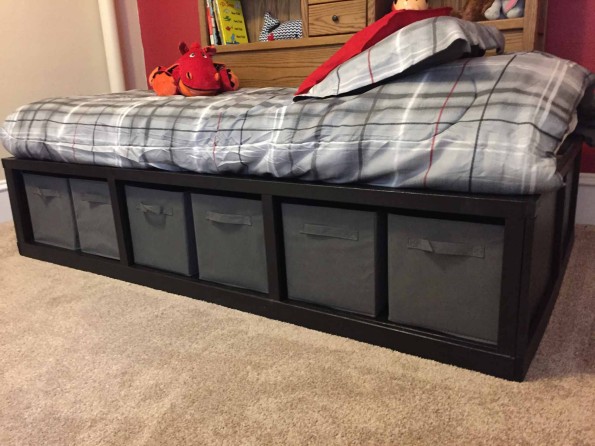 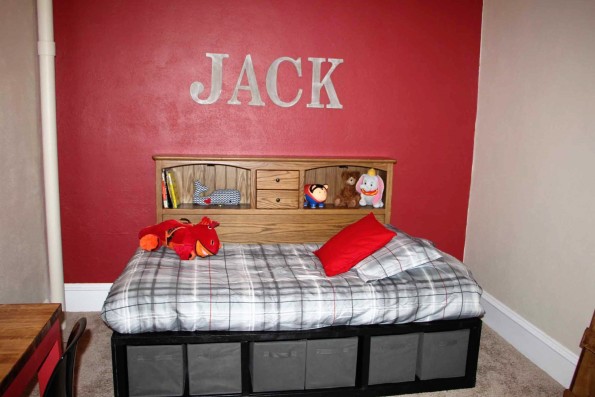 The desk which I built. I also gave him a place to hang his “favorite”pictures and papers. 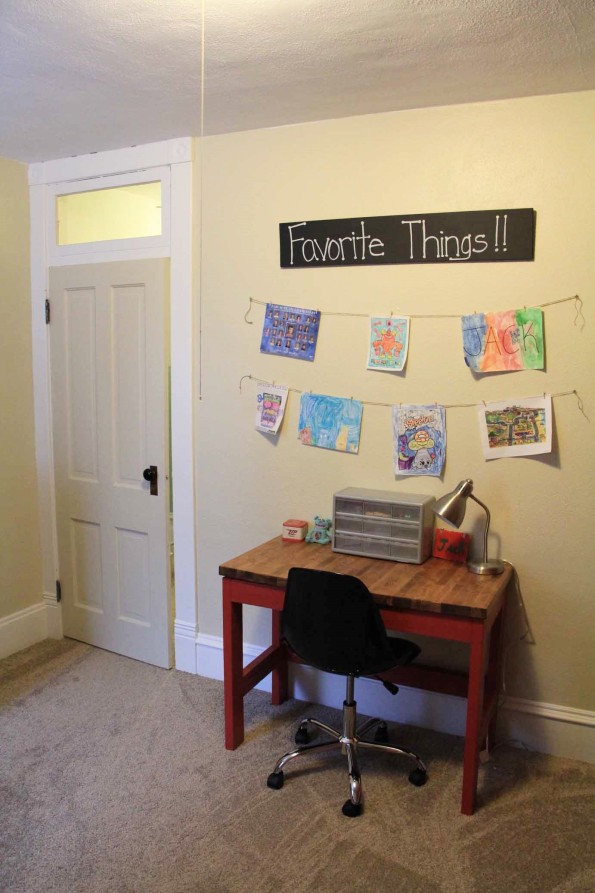 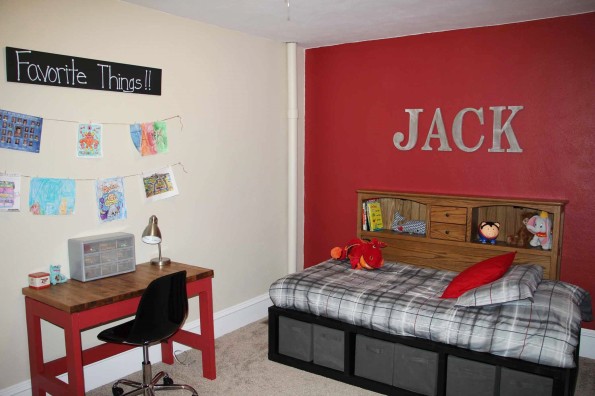 The toy bin I built as well as a star I made out of yard sticks that I painted red and glued together. I did a star because as everyone who goes to our church knows, Twinkle Twinkle Little Star is Jack’s favorite song. 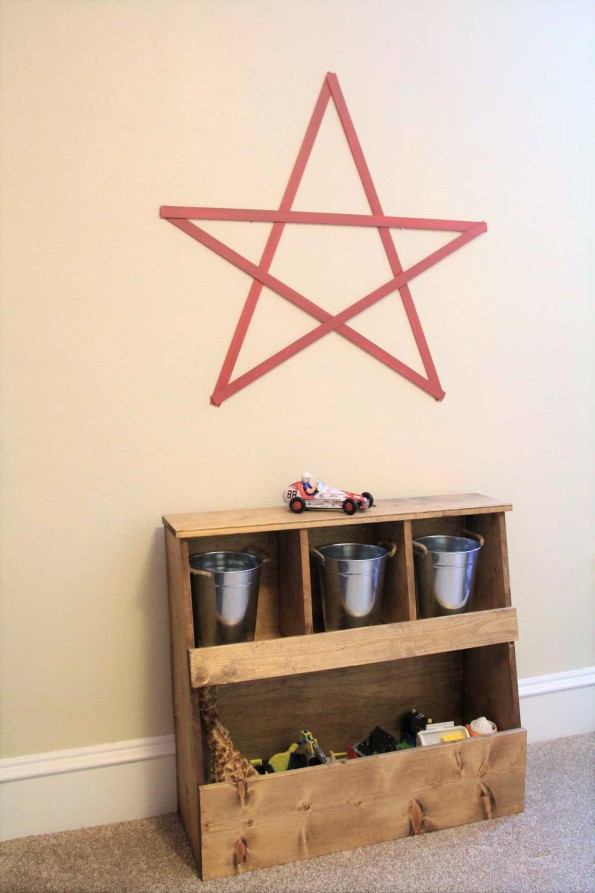 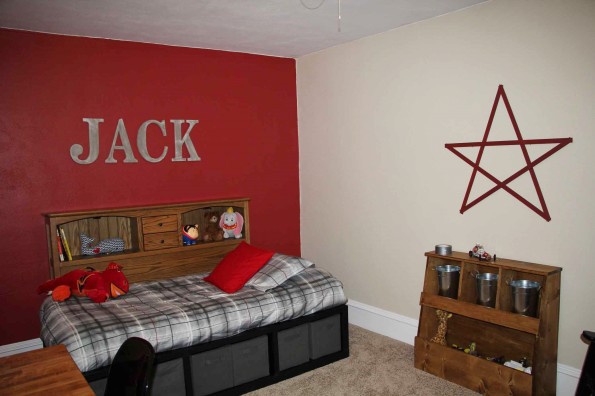 This is a first time in a long time the dresser has been in the same room as the matching headboard.  We used to have it in our room but I wanted the set to finally be together.  The rocking chair is actually an outside chair we used on our patio in town.  Jack got everything on his wishlist – a chair and  a desk – he’s not to hard a guy to please. 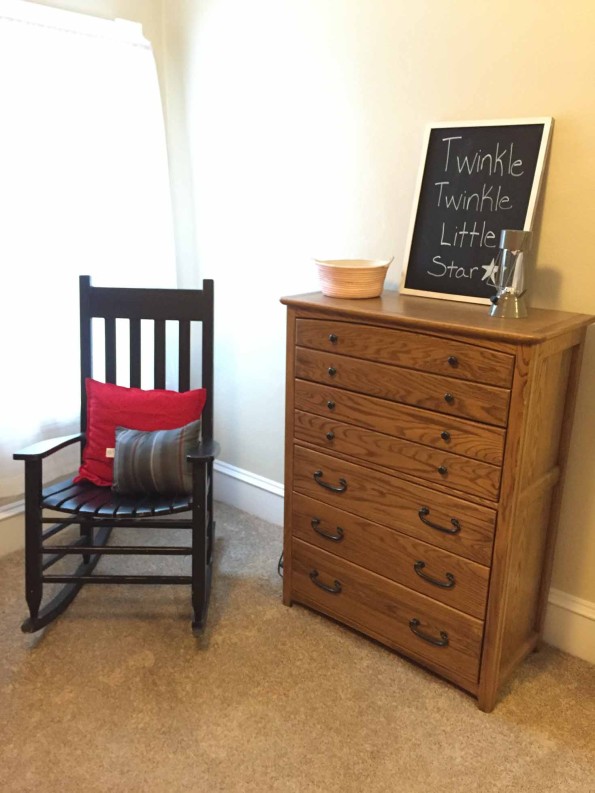 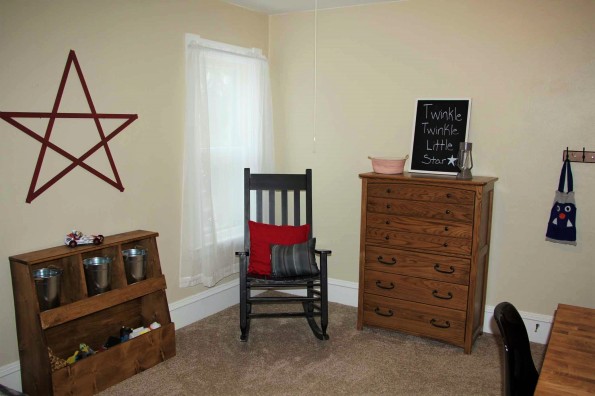 And here is my Jack’s reaction to his big boy room: 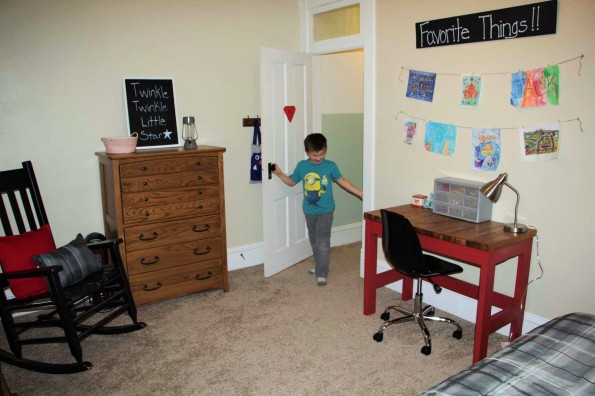 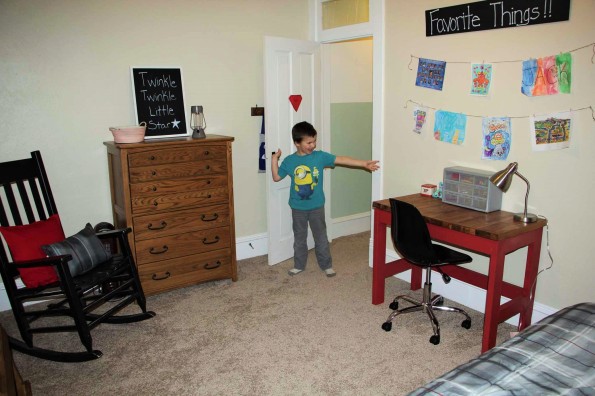 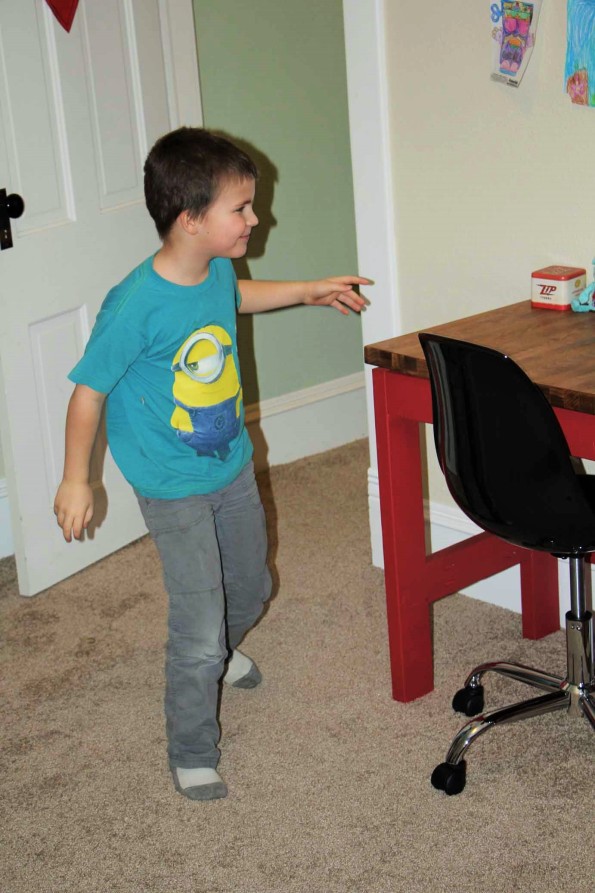 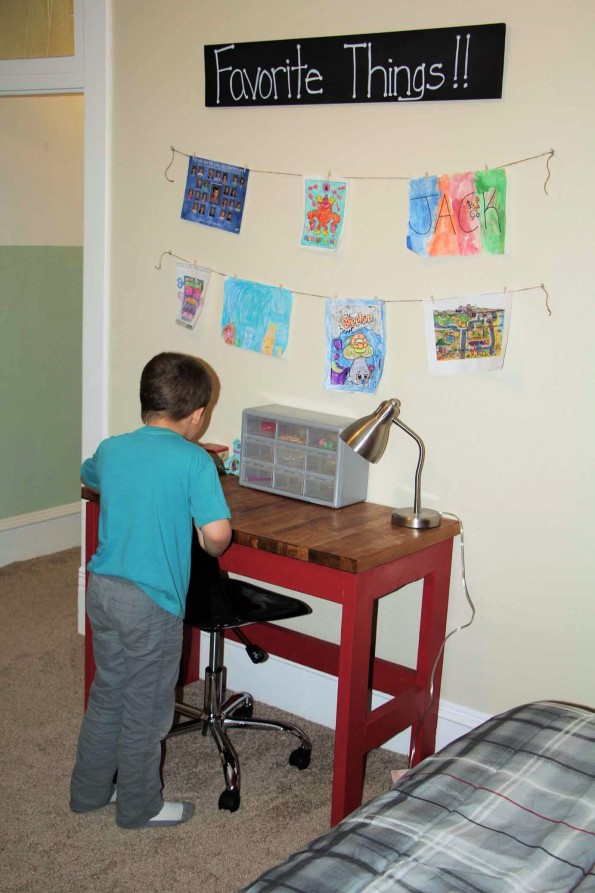 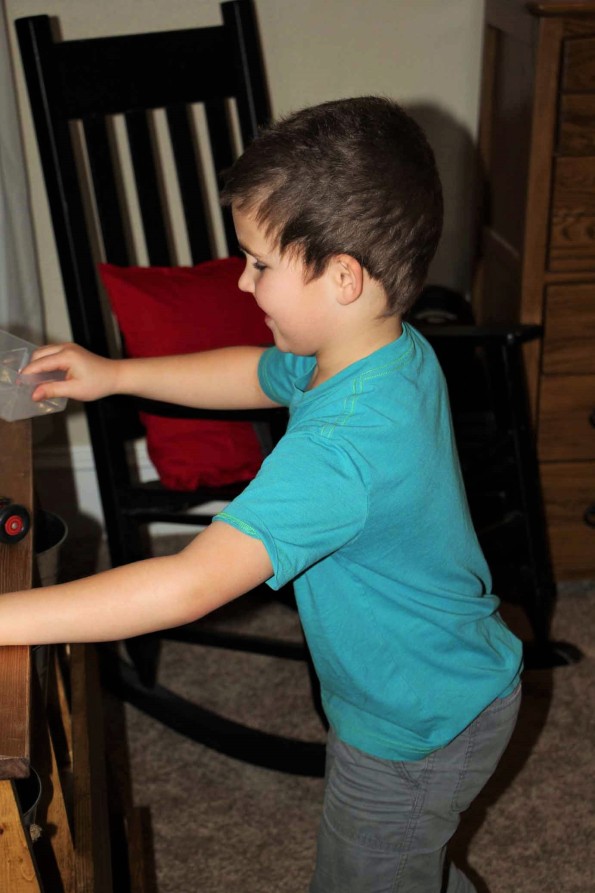 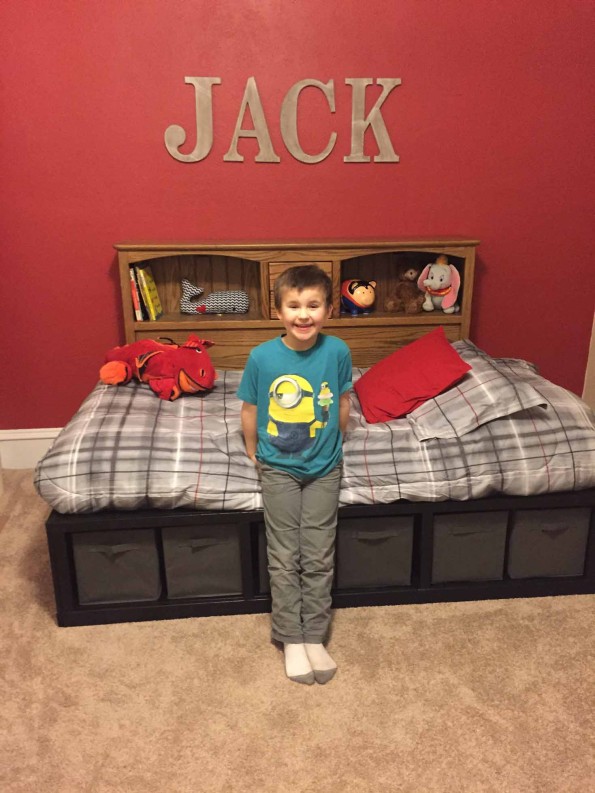 His reaction definitely made all the work worth it.  I’m happy to report he loves it!  He loves all the storage I incorporated.  My little boy is either going to be a hoarder or a storage organizer designer – it could go either way!   I love that kid and I’m so happy I was able to do this for him – it’s my way of showing him how special he is to me.  Now the room is turned over to him to put his own stamp on and to decorate just way he wants which I’m sure he will – there is no one quite like my Jack 🙂