My dad has been threatening to get us a chickens for a while now.  I say threatening because at this point in time I really don’t want to take on chickens. Growing up our neighbors had chickens and our families and a couple other families would go over and help them at butchering time.  It’s definitely a life learning lesson for a child.  It can be hard  but you learn what it takes to get your meat from the farm to the table so to speak and you learn to respect animals and where your food comes from in a whole new way.

So when he said he was going to order himself some chicks I thought he was joking – which if you know my dad would not be unusual – he loves pulling pranks.  But by golly he did – he went and ordered himself some chicks.  I was a little relieved however when he let me know they were going to be strictly for egg laying – there would be no gizzard cleaning in my future (if you don’t know what that is – yes, it is as gross as it sounds).

He went and cleaned out the old brooder shed on the family farm that I grew up on – the shed where my grandma had kept chickens years before I was even born.  It’s been in a state of slowly falling over for years now but with a little work shoring it up and a new tin roof these little chicks had a palace again – well palace is a bit of an overstatement.  You still feel like you are three sheets to the wind when you stand in it due to the crooked floors but its just fine for some little chickens.  If the eggs are lopsided I guess we will know why!

Before I continue, you may or may not know that you order your baby chicks in the mail. Its the funniest thing – you can hear them cheeping away in their little box when you go to pick them up at the post office.  These chickens were born on a Sunday in Iowa, vaccinated and put in the mail on Monday and arrived in North Dakota bright and early Wednesday morning which is where the following pictures pick up.

My kiddos and I got to go to my father’s farm and  help welcome the baby chicks to their new home.  The hope is that they will be laying eggs for the family by the Fall.

The anticipation! What’s in the box! 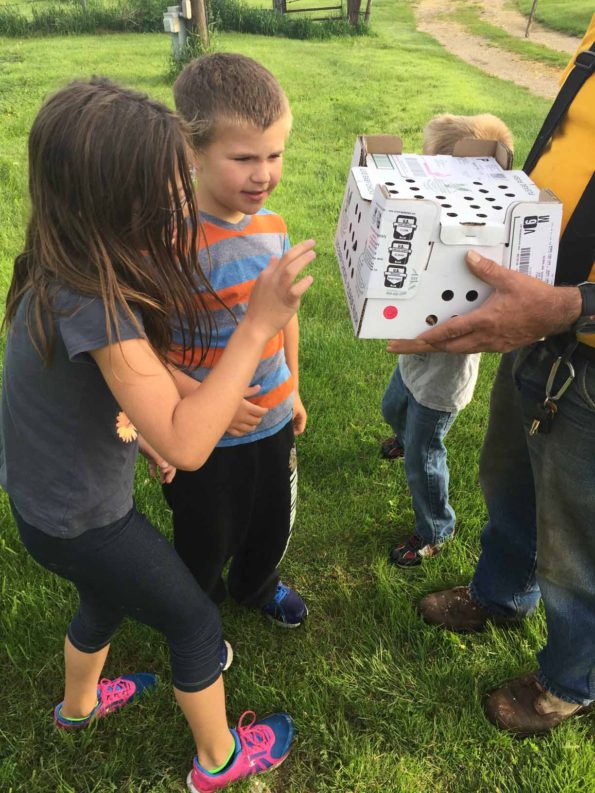 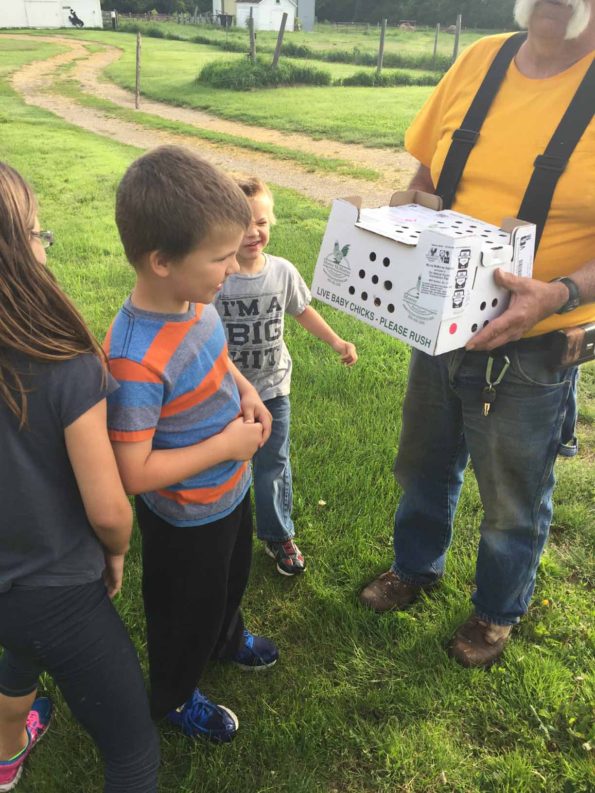 Emma got to carry them to their new nest (because she’s the oldest and the most likely not to drop the box!). 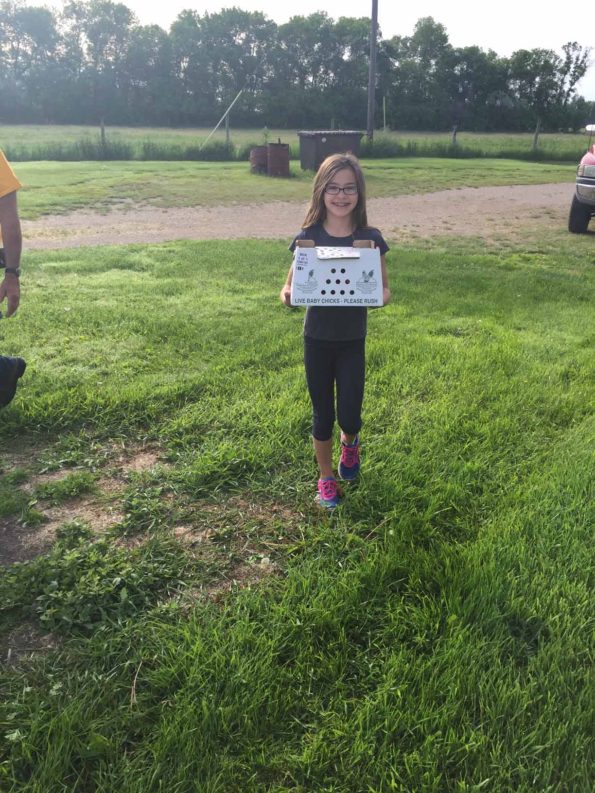 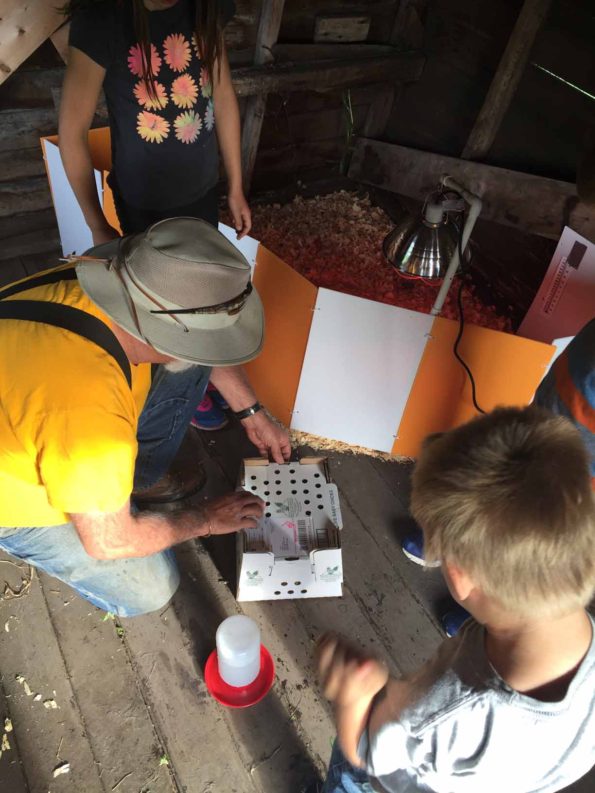 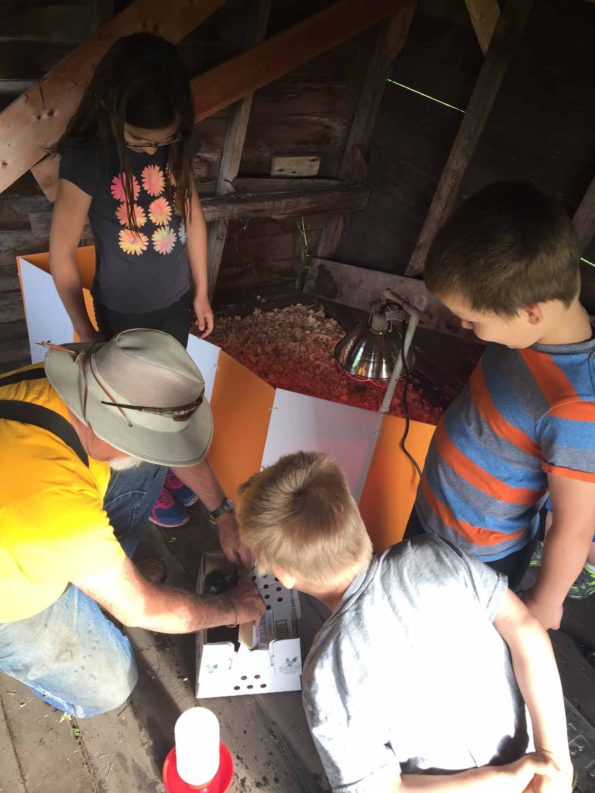 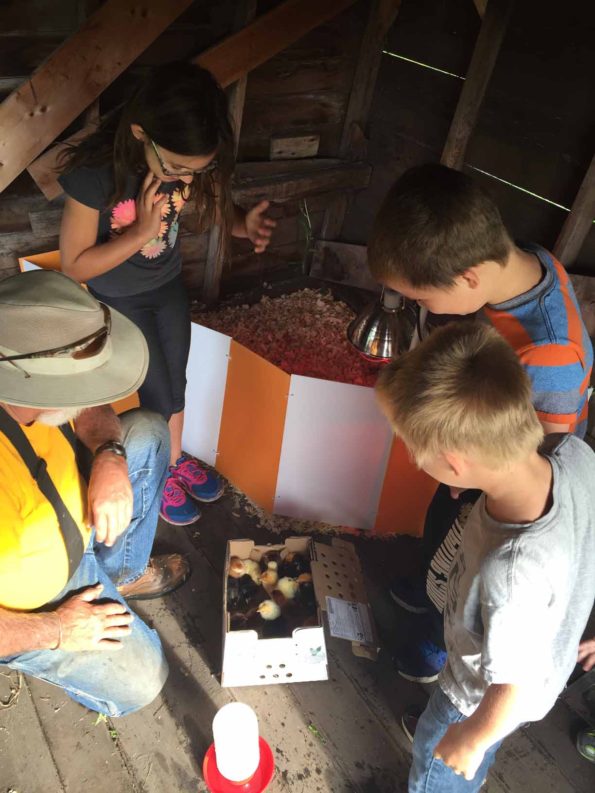 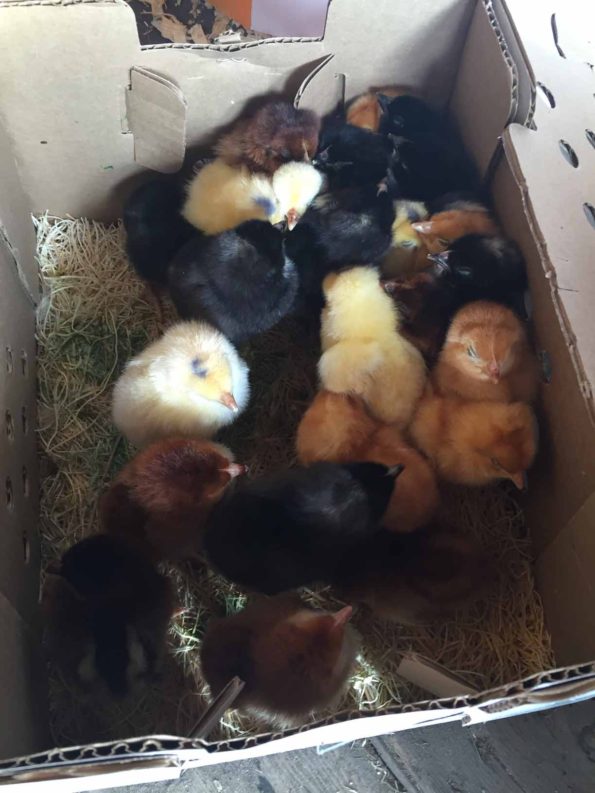 Next Grandpa showed the kids what to do with the new chicks.  He said he didn’t know if it was right or wrong but it’s what his mom had always shown him.  First you dip their little beaks in some plain water until they start opening and closing their mouths like they are drinking.  Now you know they have gotten their first drink.  Then you put them in their new little home with the heating lamp.  Once that is all done you give them water that has some added vitamins.  Since they now understand what the water is, it doesn’t take them long to find it and start drinking.  All the kids and I got to get in on the action and it was so much fun to watch them experience it. The kids were apprehensive at first but it didn’t take long for them to really get into it.  I will admit I enjoyed it just as much as they did.

And that’s the whole reason my dad had decided to become  a “chicken farmer”once again.   If for some reason the chicks didn’t make it, if they never laid any eggs,  just watching the kids with those baby chicks that morning – seeing the joy and excitement in their eyes – made it all worth it. 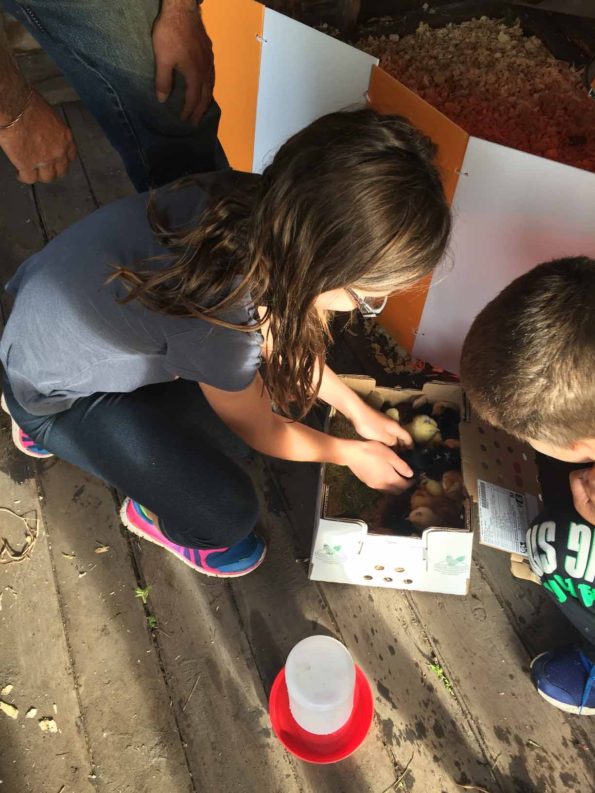 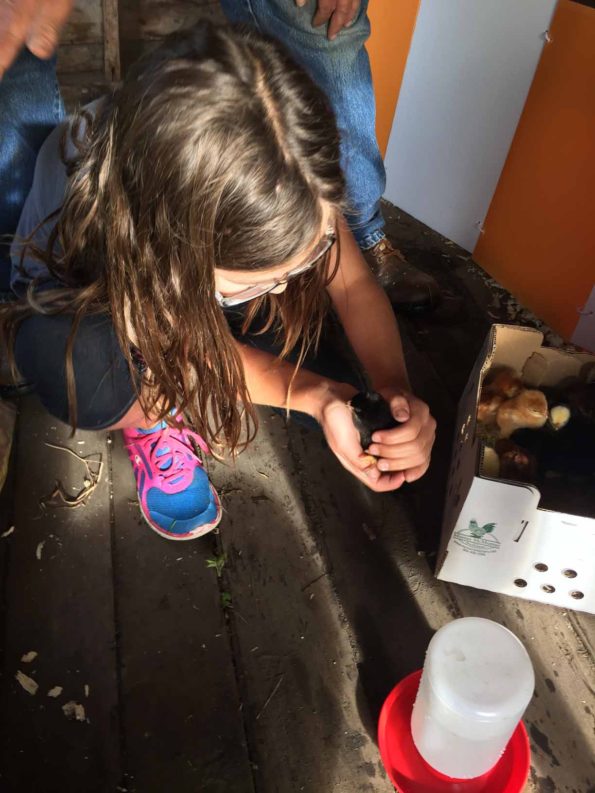 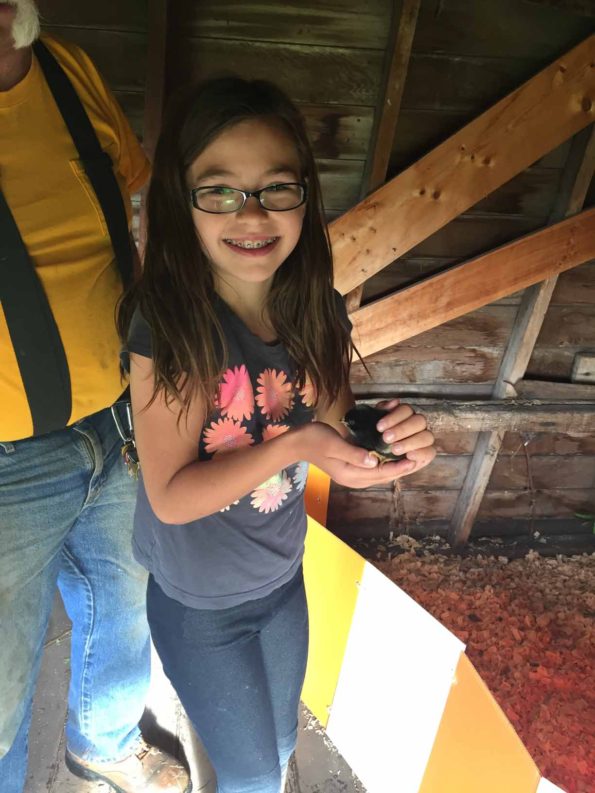 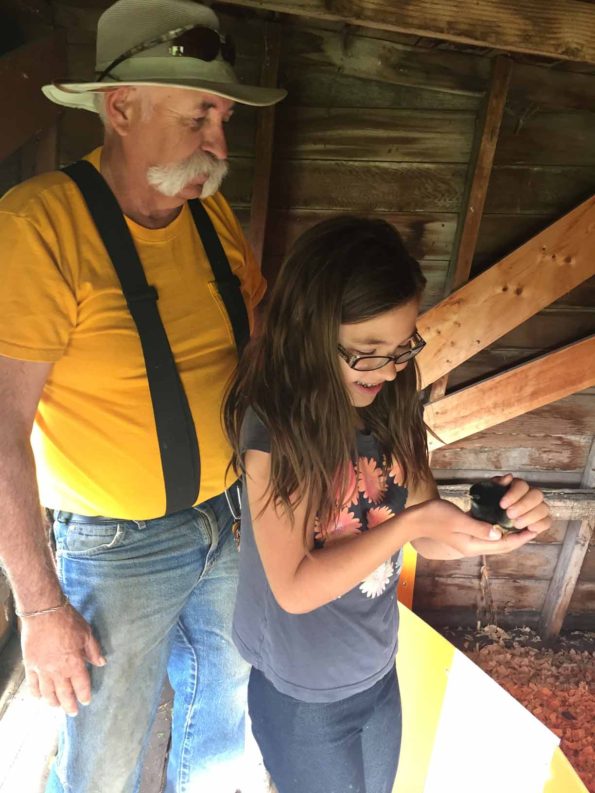 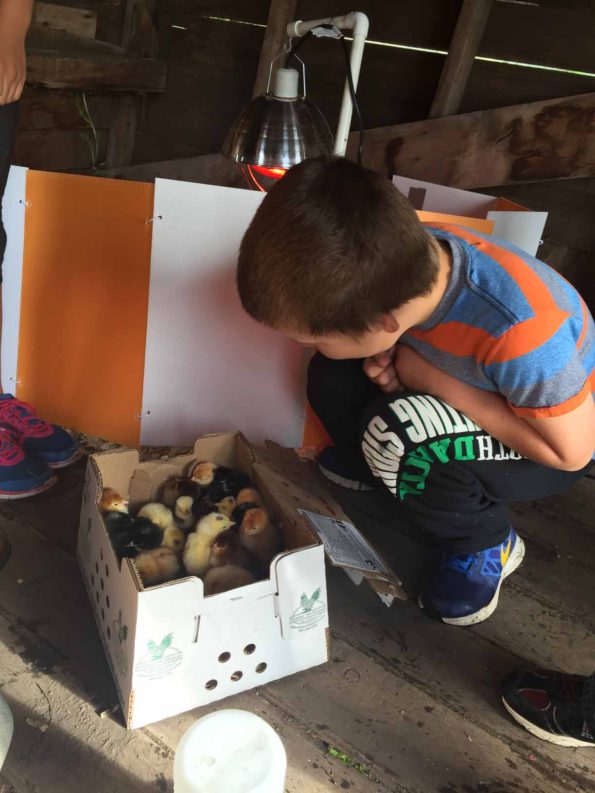 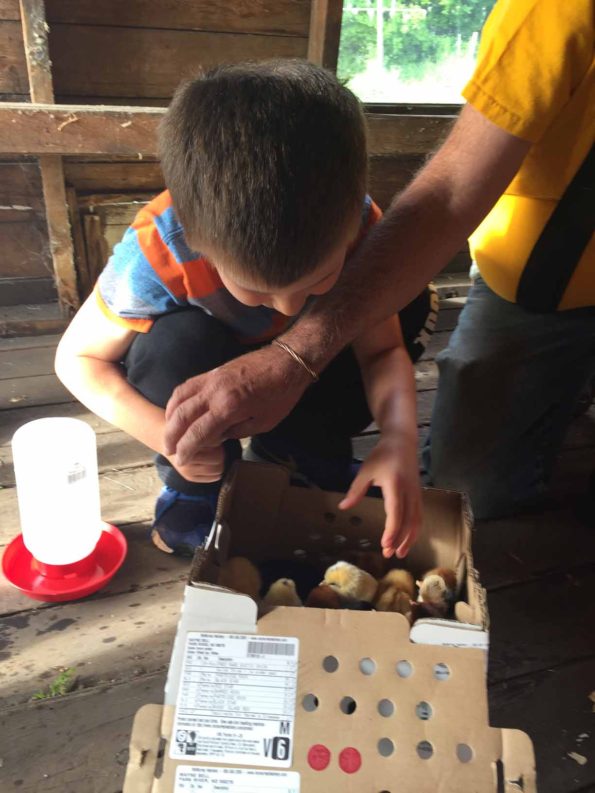 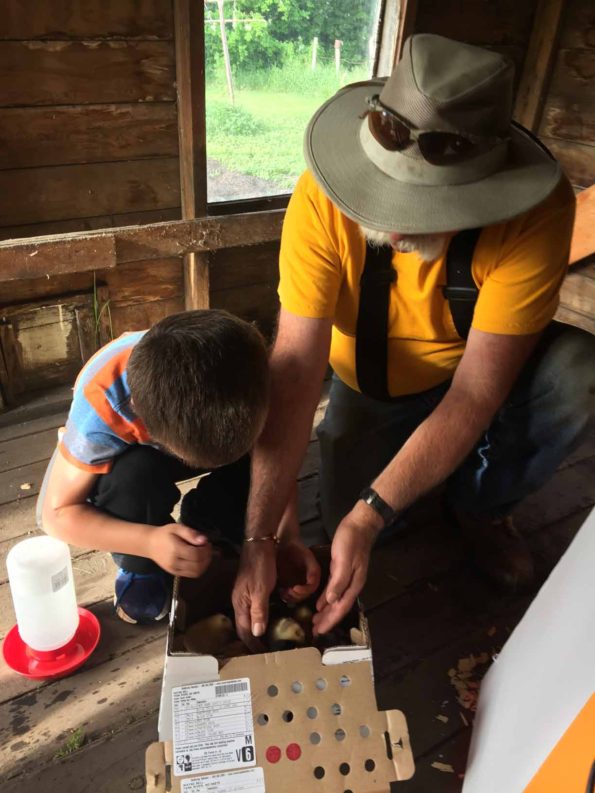 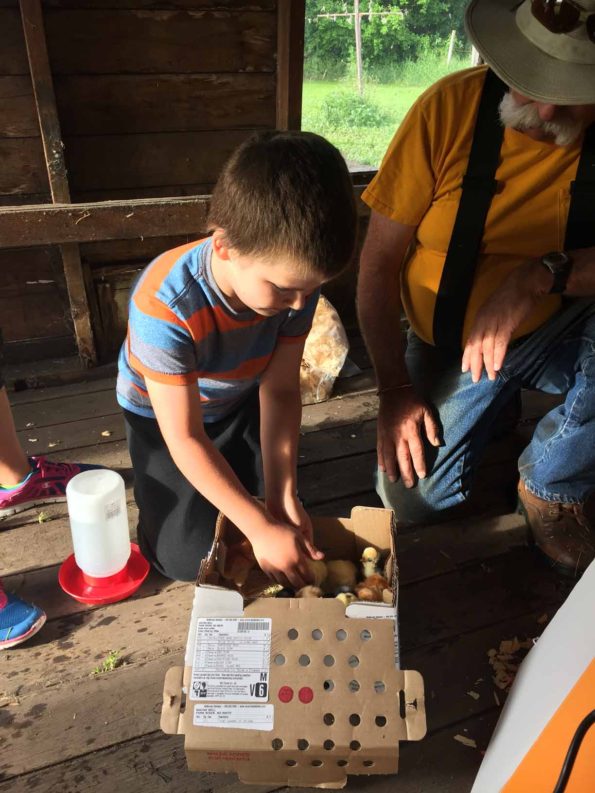 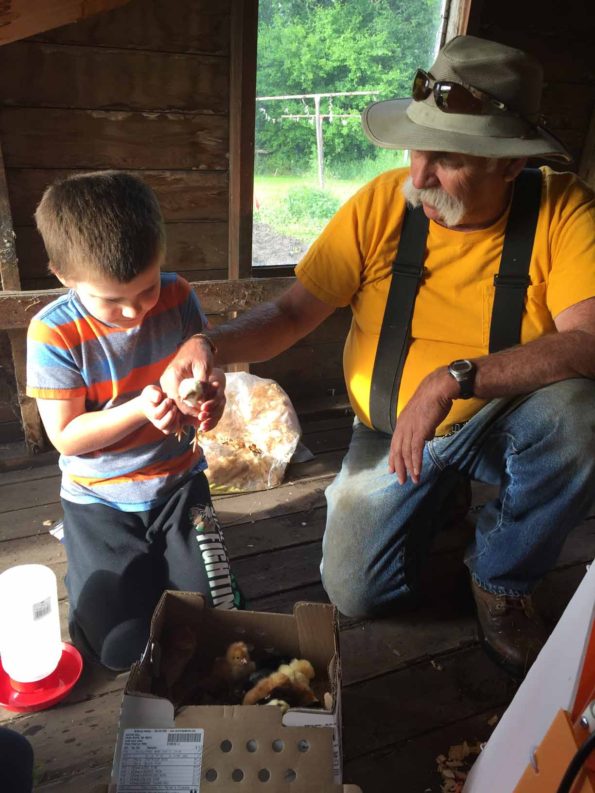 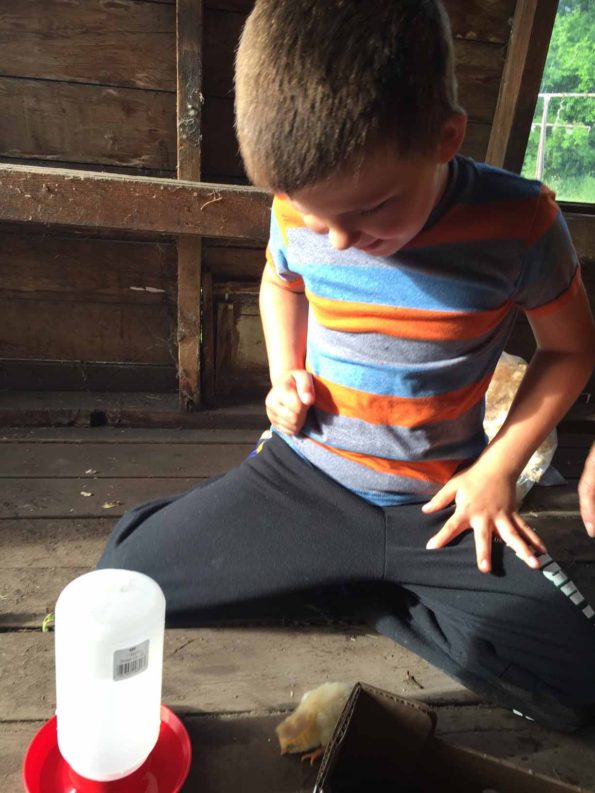 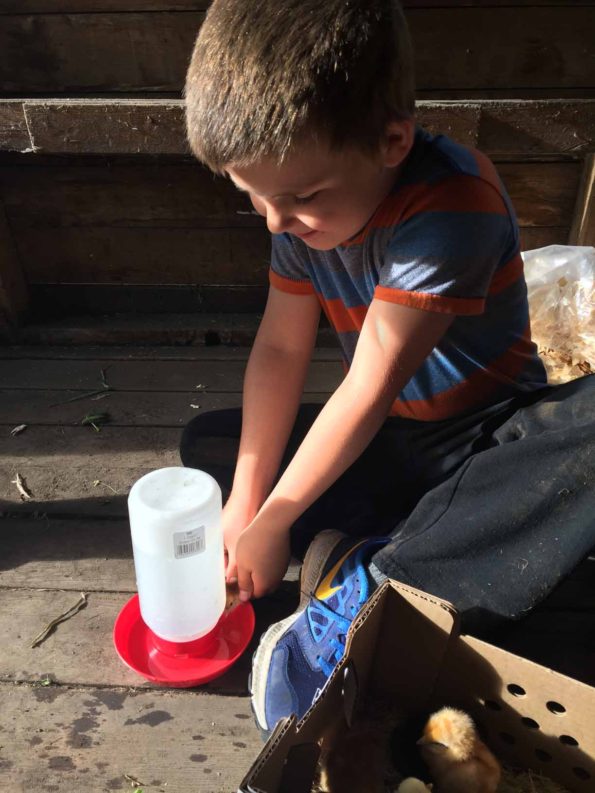 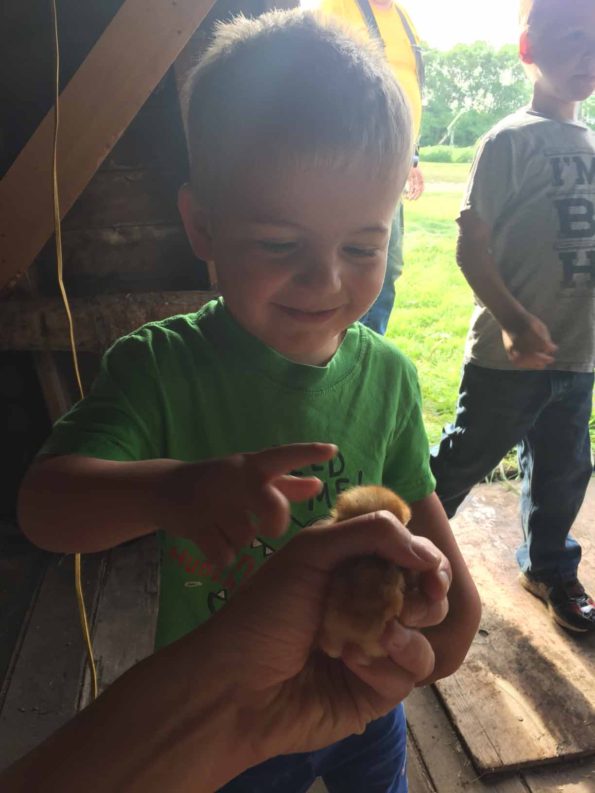 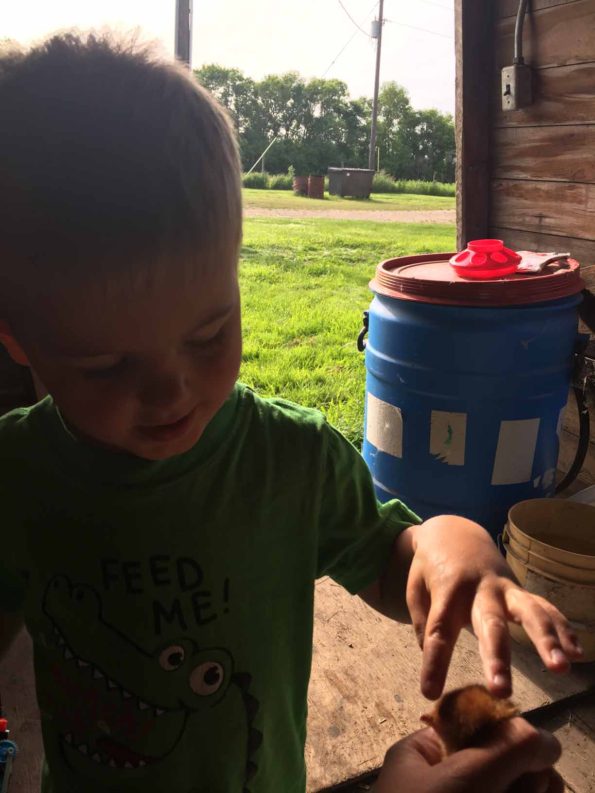 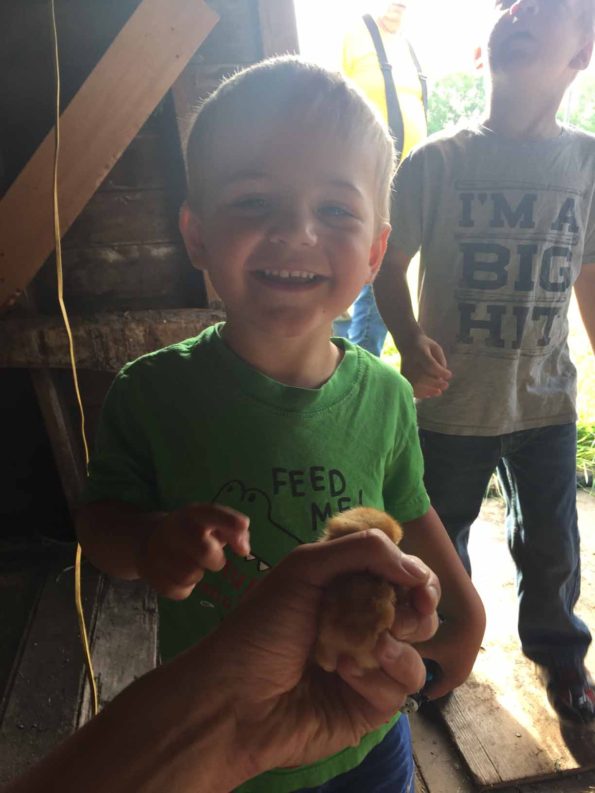 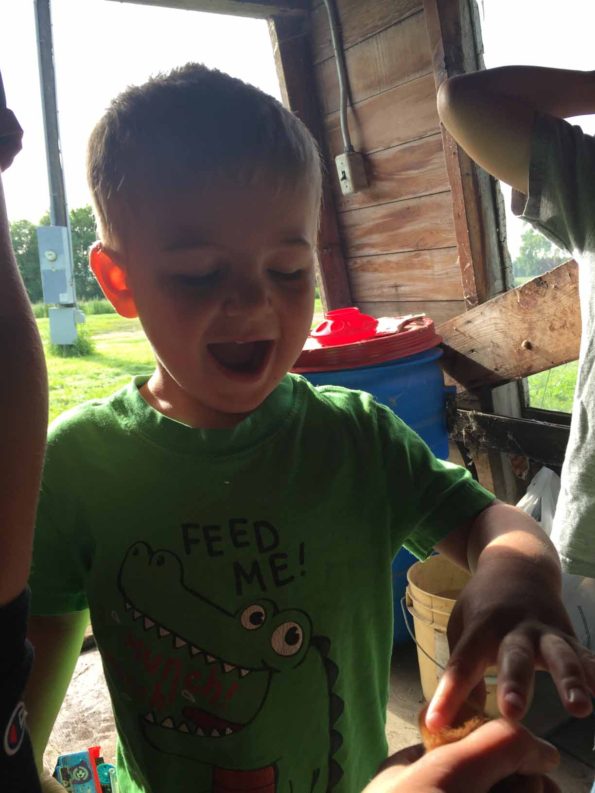 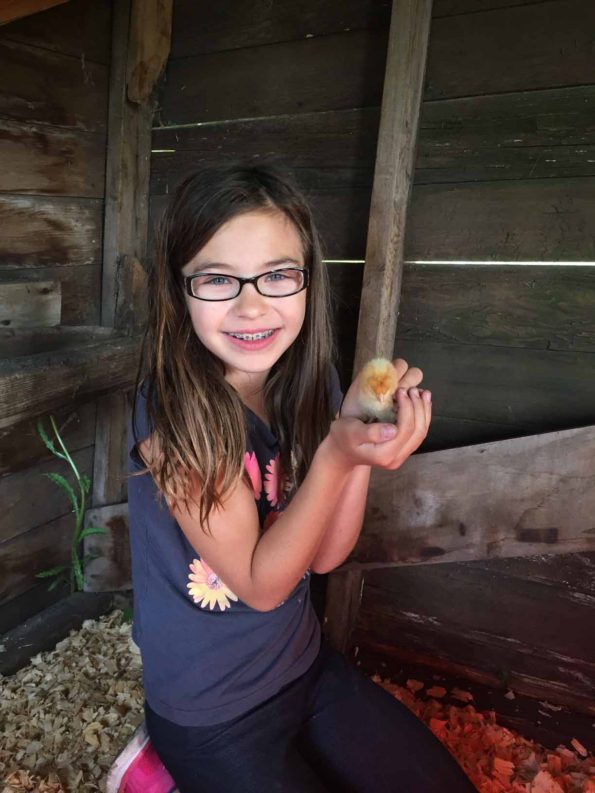 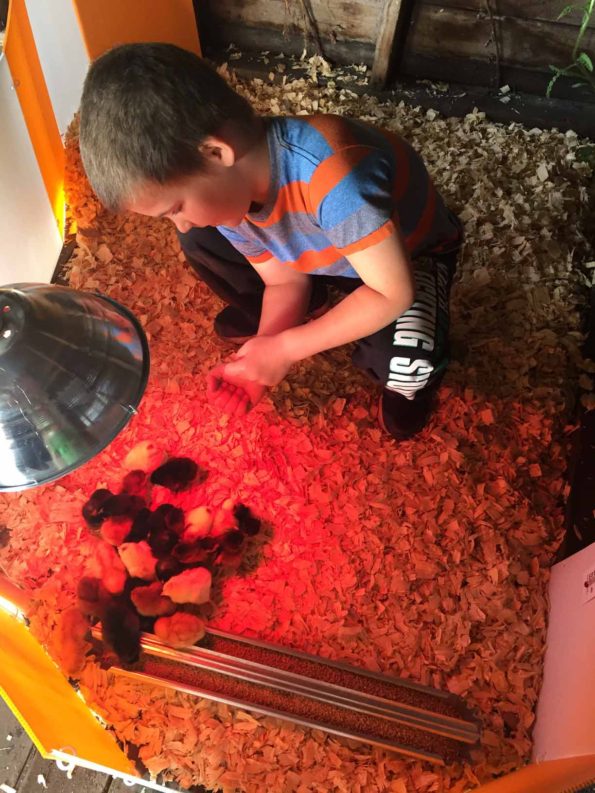 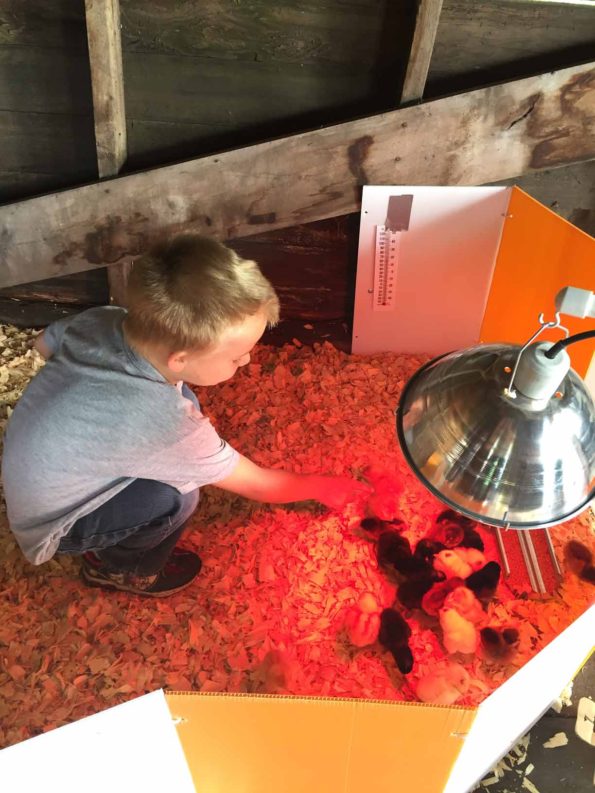 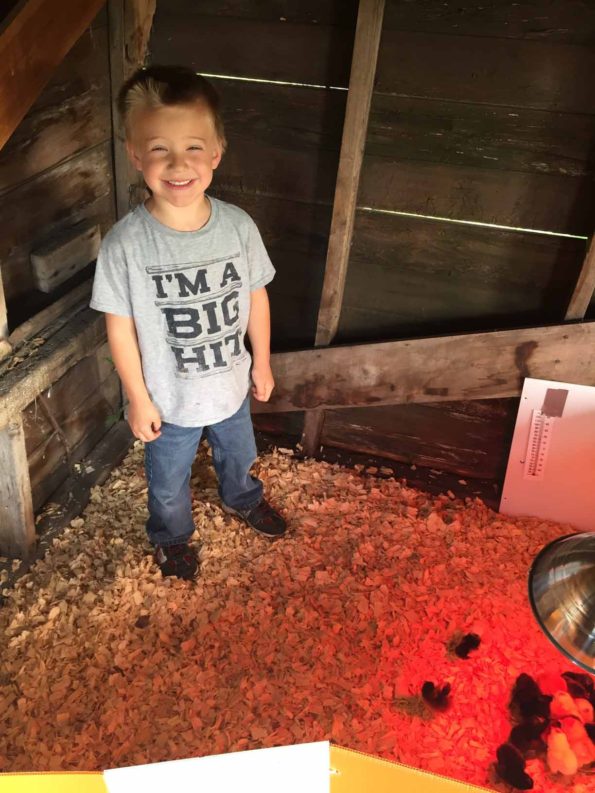