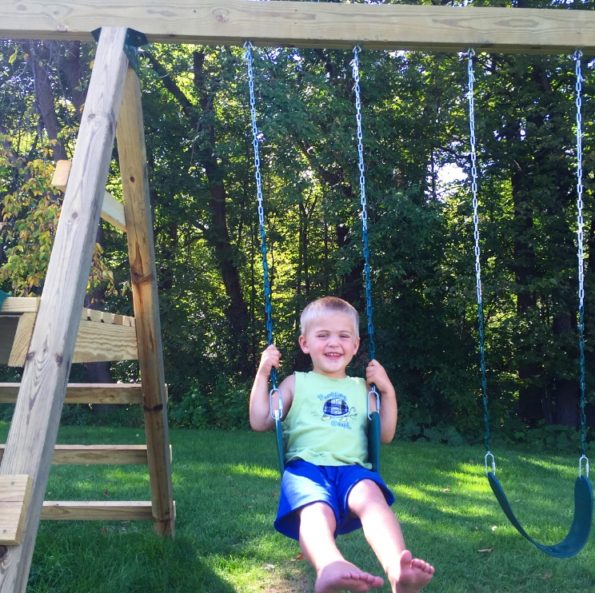 One morning a couple days ago I was playing with my two year old son and I was laughing at some silly thing he was doing and I said the words “you make me happy”.  He repeated it with his little speech impediment that makes a two year old’s speech so adorable “I make you happy?”. I said “yes you make me happy.”

The rest of the day went on as normal.  We picked up the kids from the bus stop and had our normal evening.  It wasn’t a bad day, it wasn’t  an overly terrific day – it was just a normal day.  I had my normal mom moments where I did ok and I had some moments where I know I could have handled them better.  Doesn’t it seem though at night after the kids go to bed its those moments where we stumbled in the day that we replay in our head and let our mom guilt beat us up?

That evening I was putting Liam to bed.  It can be chore getting him wound down – he’s definitely  been my trickiest kid to get into a betime routine.   I know I had probably lost my patience a few times and was being grouchy but I was laying with him and he was rubbing his hair like he does when he’s finally ready to drift off to bed.  And what did he say before he sailed off to dream land?  “ I make you happy.”  I kissed his head and whispered back “ yes you make me happy.”

It made me realize that children don’t expect us to be perfect.   Out of all the things I thought I screwed up that day what did he remember?  That I told him He makes me happy.  I’m probably never going to have a day where I  think, “Wow I nailed it today! Total mom of the year to me!”  but you know what we don’t need to!  We are going to lose our patience, we are going to yell sometimes and regret it, we are going to forget their snack one day, were are going to send them to school with mismatched gloves other days, we are going to get them dressed only to realize at the end of the day you put them in their little brother’s underwear… The momfail list goes on and on but at the end of the day  children  tend to see the best in us and that’s pretty awesome.