So I have to admit it has taken me awhile to get my house back to normal decor wise after the Christmas season.  I loved my Christmas decor so much and although I was ready to take it down, I’m afraid I got a case of the blahs when I looked around afterwards.    Oh I could have put everything back exactly where it was before Christmas but that would have just been too easy!  So today I’m focusing a little bit on my dining room and a few small changes I made.   Before Christmas I had painted an old dresser a distressed white and placed in front of the bay window like this: 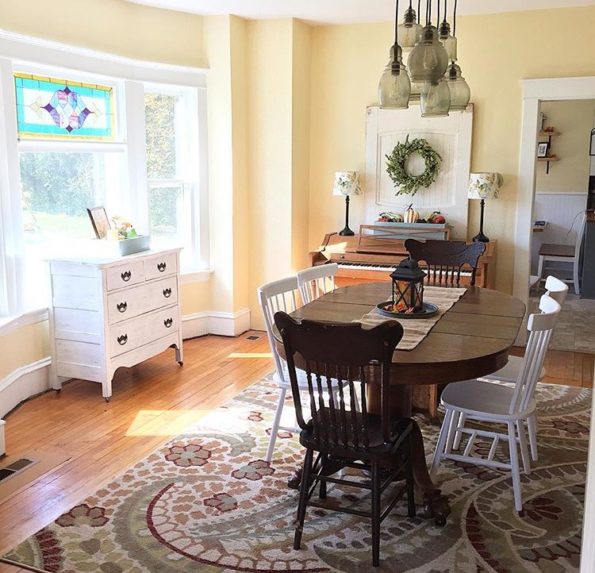 However that spot is where the tree goes so when Christmas rolled around, the dresser rolled on out of there (rolled, cuz its on wheels…get it…too much? ok).  If  you remember I moved it over to a different spot in the room and then framed up some chicken wire to hold Christmas cards we received. 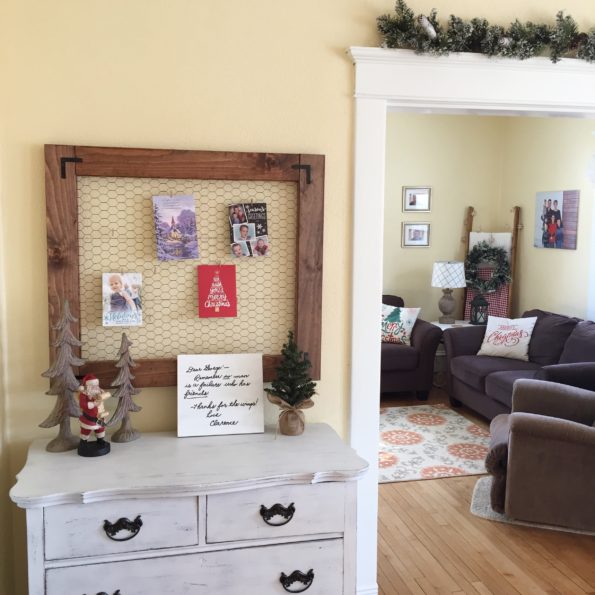 I loved  the set up so much I decided to keep it there after Christmas and display some family pictures on it. 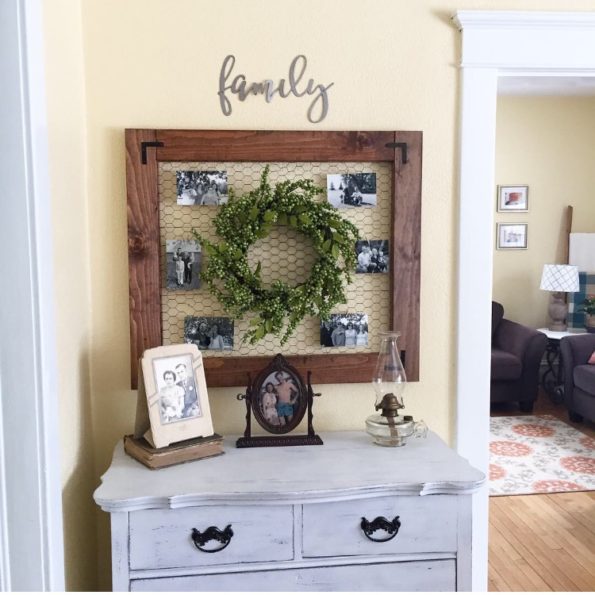 This however left me some real estate in front of the bay window.  I could easily just not put anything there.  Less is more Heather I try to keep telling myself. But then again maybe its not – maybe its like chocolate, where more is more.   For now, we’ll go with that logic.

So what to put there?  I thought about it a little bit and then decided to play a little homage to grandpa.  You see grandpa always had  a chair in front of this window.  A recliner to be more specific where he could sit and relax (when he would let himself – he’s always been a hard worker)  looking outside and warming himself in the gorgeous sunlight that the bay window lets in.    Well I didn’t want to go out and buy a chair but I did know of one that might work to give that area a small sitting area.

One day back when we first moved to the farm, grandpa came out of the quonset carrying a beat up old chair.  He brought it over to me and said “I heard you like to fix things up and thought maybe you might want to take a crack at this. ”  I looked at the chair and was immediately terrified and super excited at the same time.   The fabric and some of the cushion were in horrible shape but that woodwork! I am a sucker for old craftsmanship and the woodwork on this chair, although in need of some love too, was giving me heart eyes.    Here’s a picture of the before: 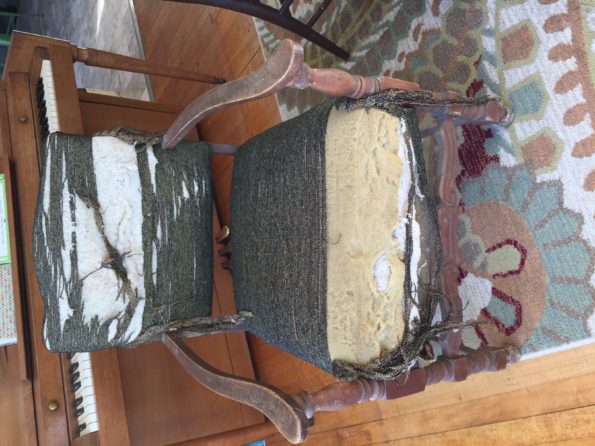 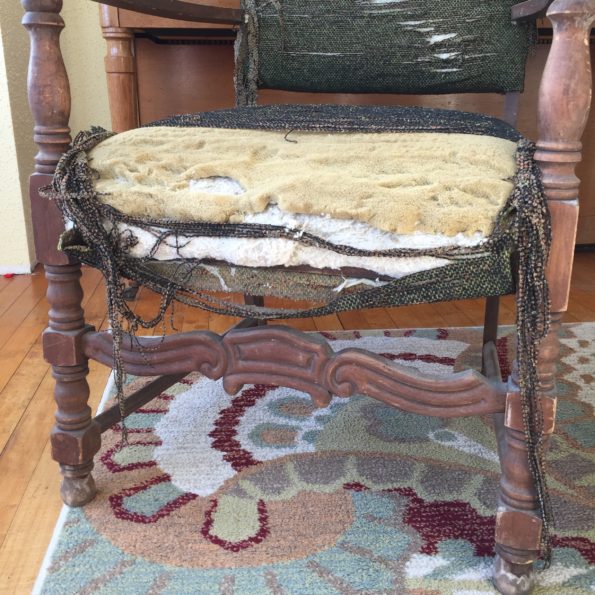 I put this project off for two years. I almost decided to forgo it and put it in the trash pile a couple times.  This was  going to be a more difficult reupholstry job i had ever done.  Also the chair was super rickety – to say you needed to sit down gingerly was an understatement.   The potential that this chair had though was just too great to pass up.

I brought it outside last week and worked on removing the rest of the frabric. It was a pretty dirty job.  The fabric was literally disingrating into a fine dust when I pulled on it.  I made sure to pay special attention to how they had originally attached it  – there were a few special tricks they had done to work around the arms.

Next I went to work repairing it structurally, adding wood glue and extra screws to tighten everything up.  Its never going to be a super strong chair but I think I can confidently sit on it now.  We’ll see how it holds up to my kids – that’s another story – I’m not sure any piece of furniture has ever been made to stand up to the destruction that kids can cause.

To bring the woodwork back to life and hide some of the water stains it had, I gave it a good dose of Old English.  I can’t believe how it just soaked it up and started shining again.

Now it was time to pick the fabric.  I wanted sone thing neutral – but also something that had a little color to it to mask the inevitable kids stains it will get.  I found this at Hobby Lobby in their upholstery fabric and thought it fit the bill pretty good. 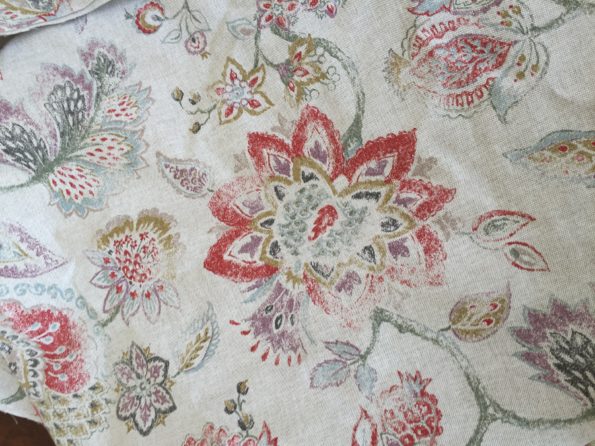 I’m definitely not a professional at this reupholstery business –   I just started cutting, stapling and sewing.   Basically winging it and praying I had bought enough fabric since I tried to spend the least I could.  It came really, really close but i eeked it out and here she is in all her new glory. 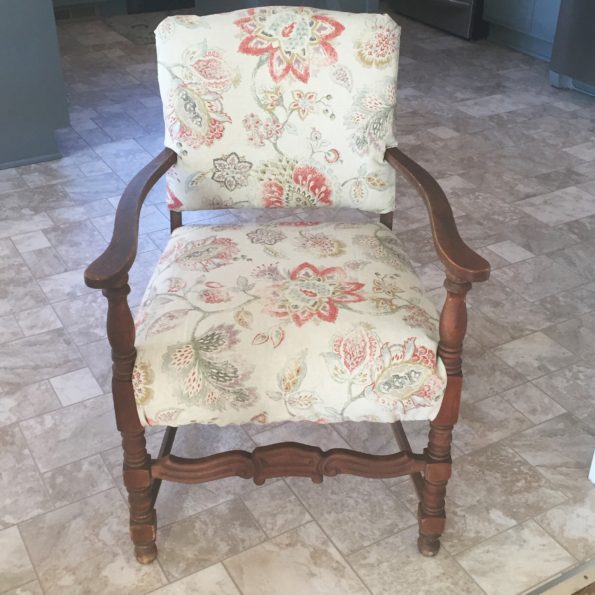 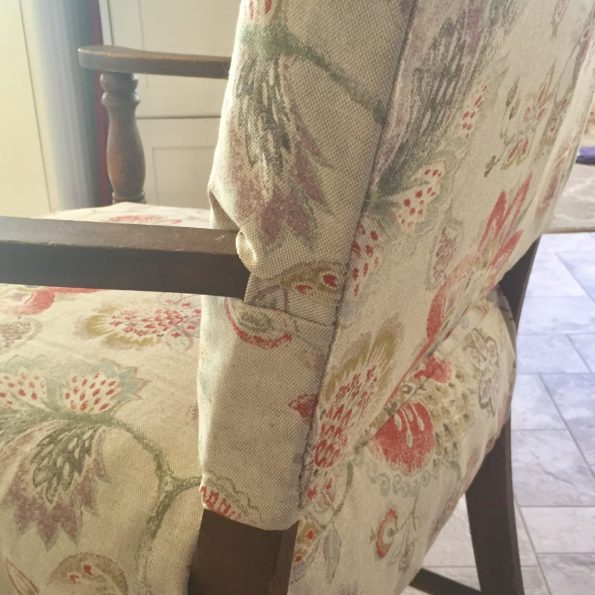 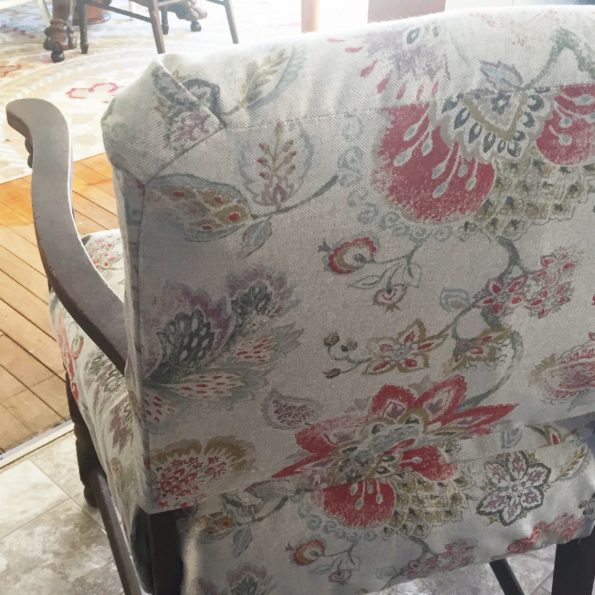 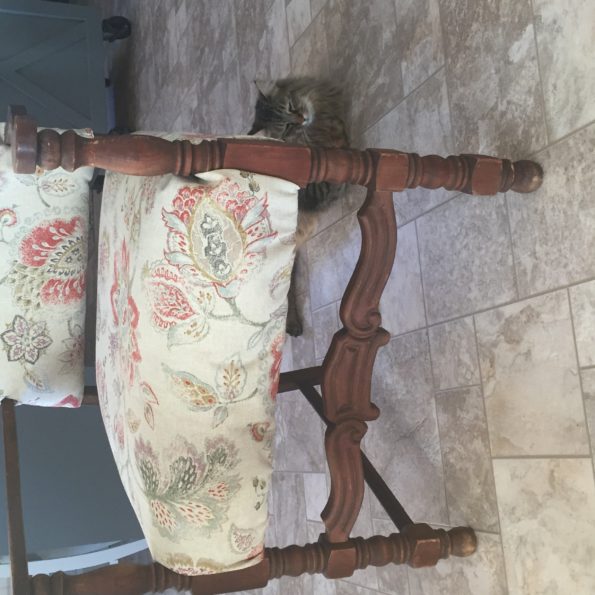 I love that this old piece has new life!  I decided though I wasn’t done.  That area was going to need a little side table as well and I just so happened to have another old piece in my basement that I inherited and haven’t been able to let go – really people I promise I’m not a hoarder! 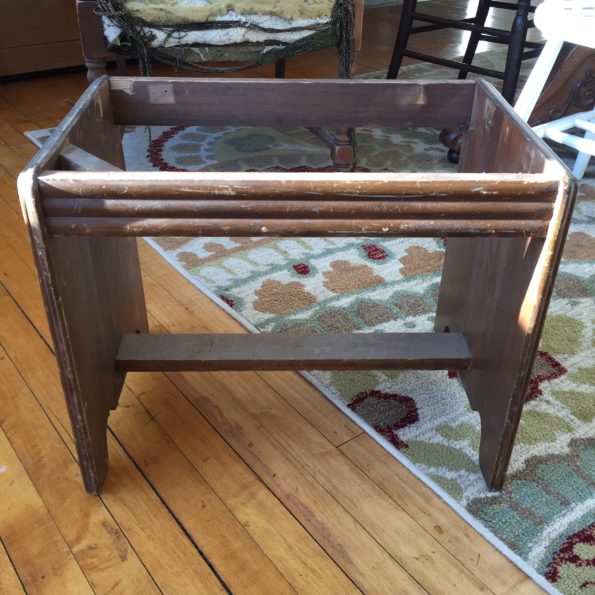 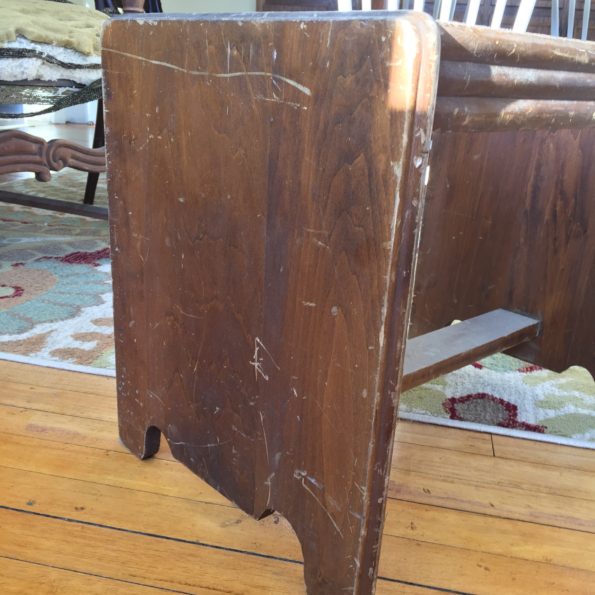 As you can see it has also seen better days.  I wasn’t convinced a coat of Old English was going to save this wood.  I cut up some 1 x4’s and nailed them to the top and then painted it in some Robin Egg blue chalk paint that I had been gifted.  I had just enough left of it to do this little project. 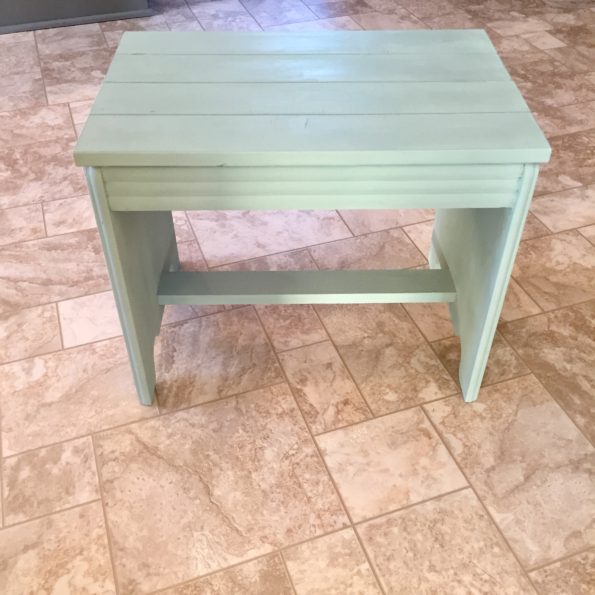 And here it is all set up just waiting for me to relax, grab a book and soak up some sunlight! 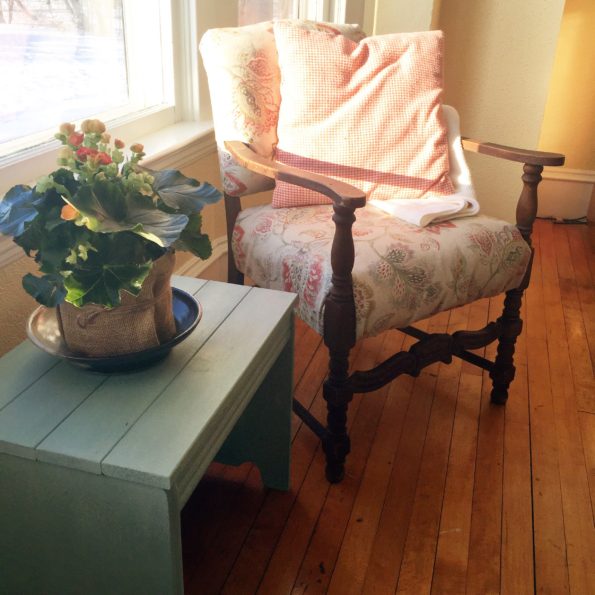 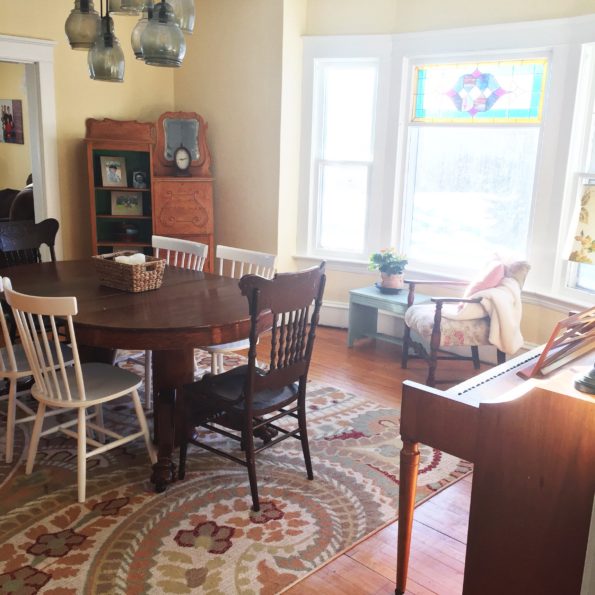 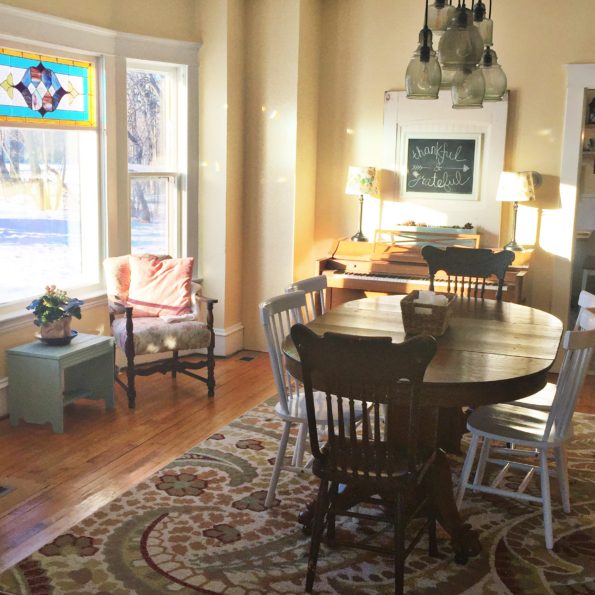 The last picture is a little “yellow” – the morning sun really floods this room and it’s sometimes tricky for me to get a good picture.  I thought about taking a new picture but you see then I would have to remove the 100 piece puzzle, transformers and Light Brights that seemed to have found residence on my table in the two hours since I took this last picture! 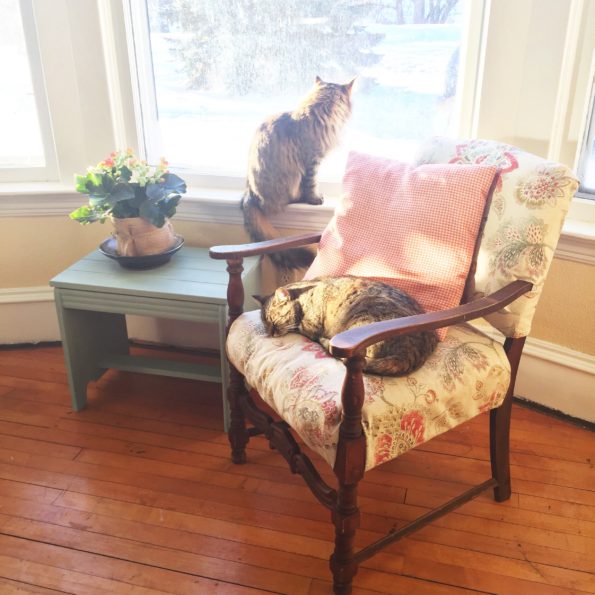 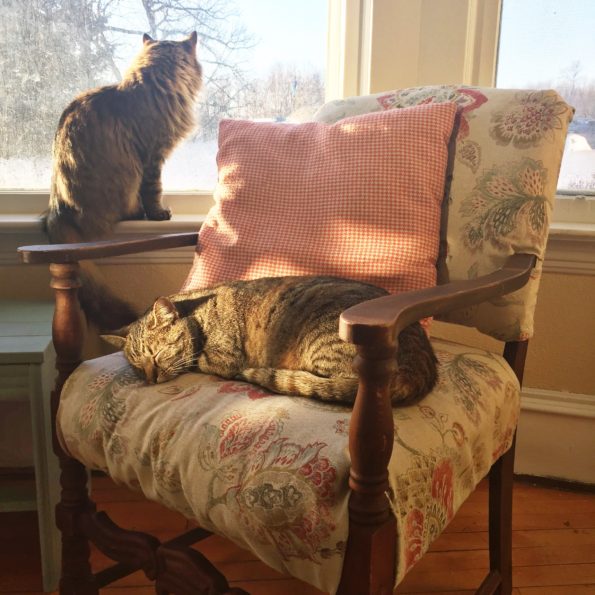 I guess at  least someone is getting some relaxing in.  I want to be a cat.