So here’s the scoop on what’s been happening in my little world the last couple weeks.   I’ve built more in the last 2 weeks than I have in months!  As the name of the title implies – yes it includes a coop (no not a mini coop car unfortunately but a chicken coop which is almost as cool, right?) but I also finally got a sandbox built.

I’ve mentioned before that I wanted to build a sandbox and after spending Easter at my in-laws where my three year old practically spent the entire day babysitting himself in their sandbox I knew I needed to get to work  on it stat!  I decided to make one with a cover to keep the leaves and debris out – and when I say debris, I mostly mean cat tootsie rolls. I am fairly certain my cats think they allow us to live in this house so I’m sure they would naturally assume I built this sandbox as an oversized littler box for them as well.  I used an Anna White plan which you can find at this link http://www.ana-white.com/2011/10/plans/sand-box-built-seats.  It’s a pretty awesome plan because the cover actually folds back into little benches for the kiddos.  I used 2×4’s instead of 1×4’s to make it sturdier and I also used 10 foot boards instead of 8 foot boards (the boards are cut down in half) to make it a smidge bigger

It’s a very easy build.  I was able to get mine cut and built in a few short hours.  If you are looking for a larger sandbox this might not be a great pick for you.  In fact I was a little worried when I got done with it that it might be too small but all my kids have said they love it so I told myself to stop worrying my mommy butt about it. 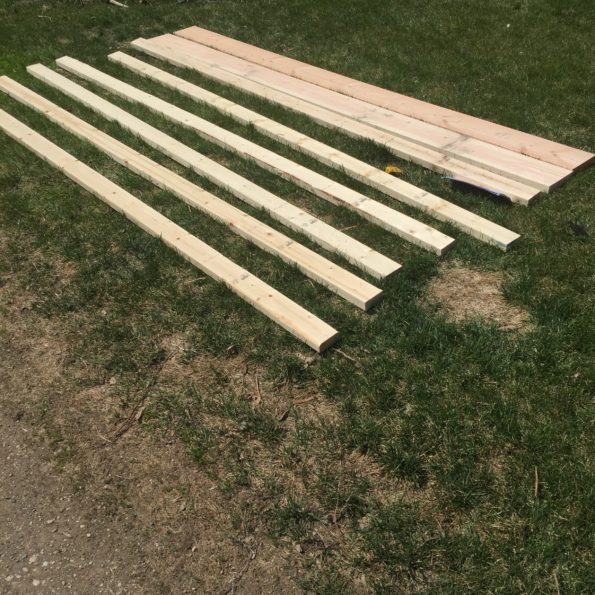 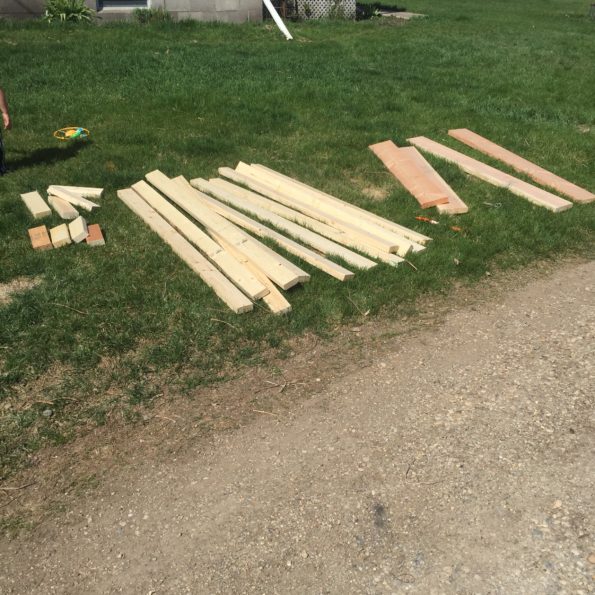 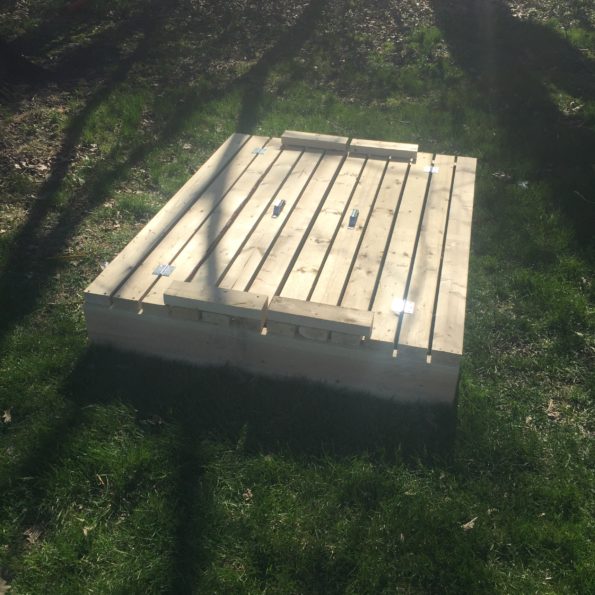 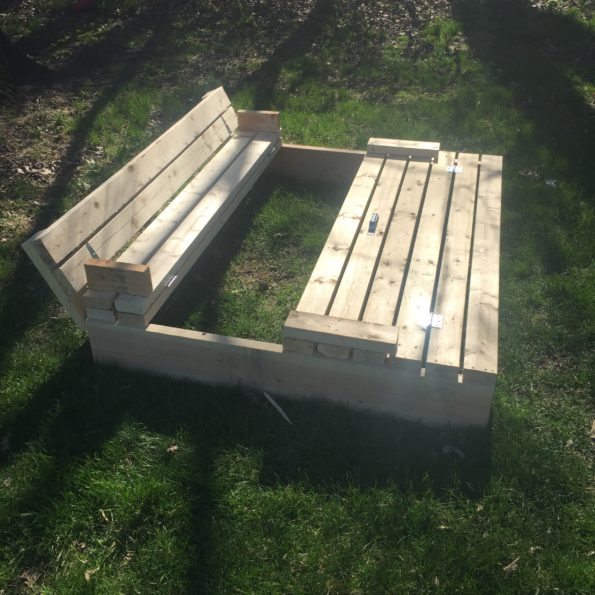 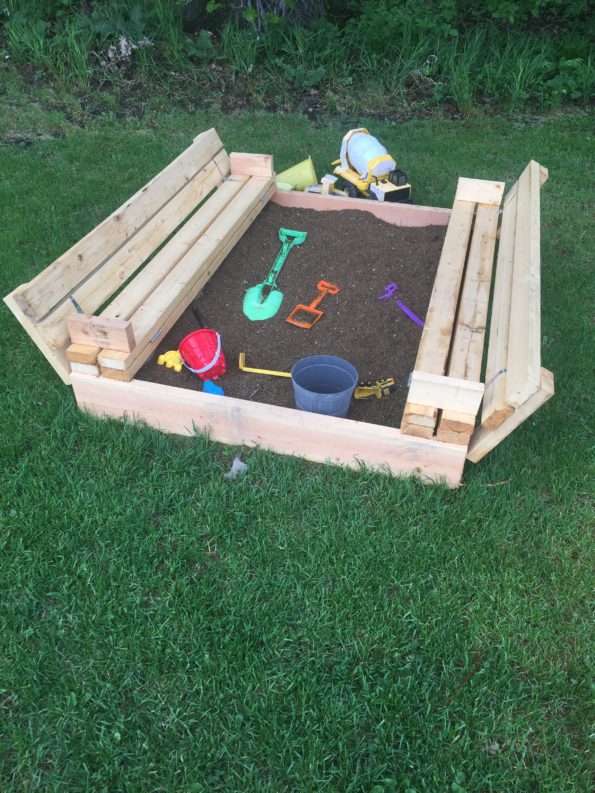 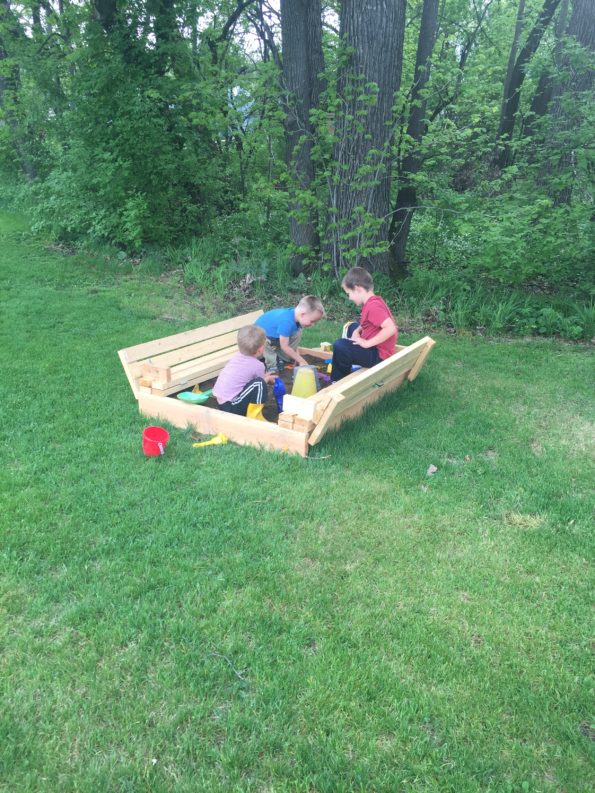 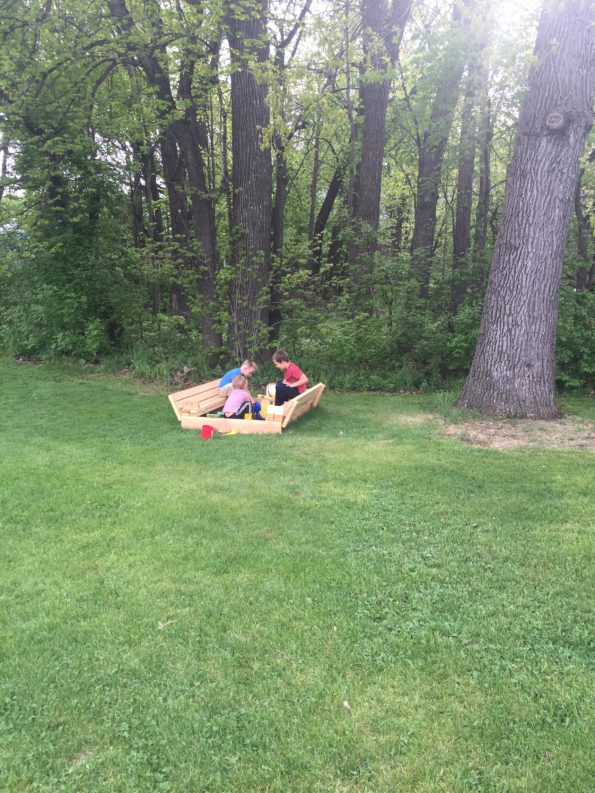 Last week was was an even bigger week.  If you might remember from a post last summer, my dad had gotten chicks and my kiddos got to help welcome them home.  Well my dad has been very busy and my kiddos have been wanting to do more with the chickens so it was decided we should move the 8 remaining chickens to our house. My parents gifted us the cutest little coop and last Saturday the chickens moved to their new farm. 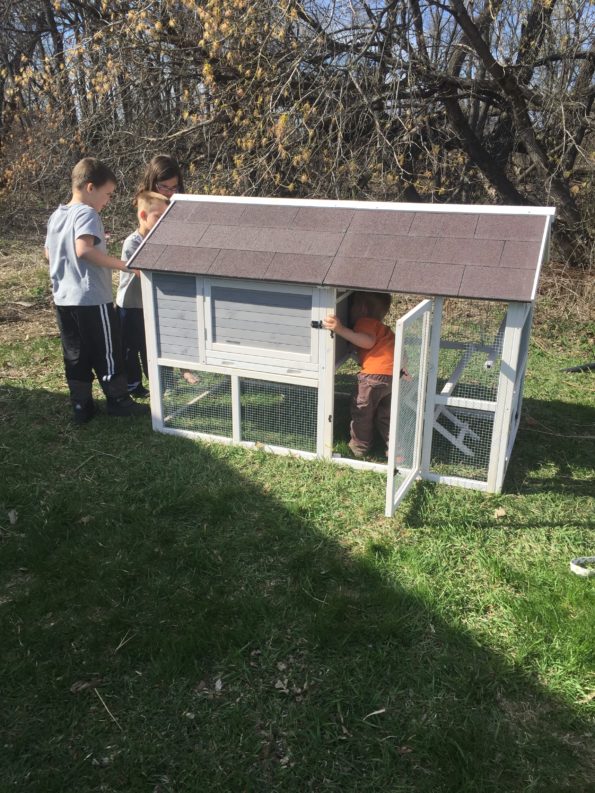 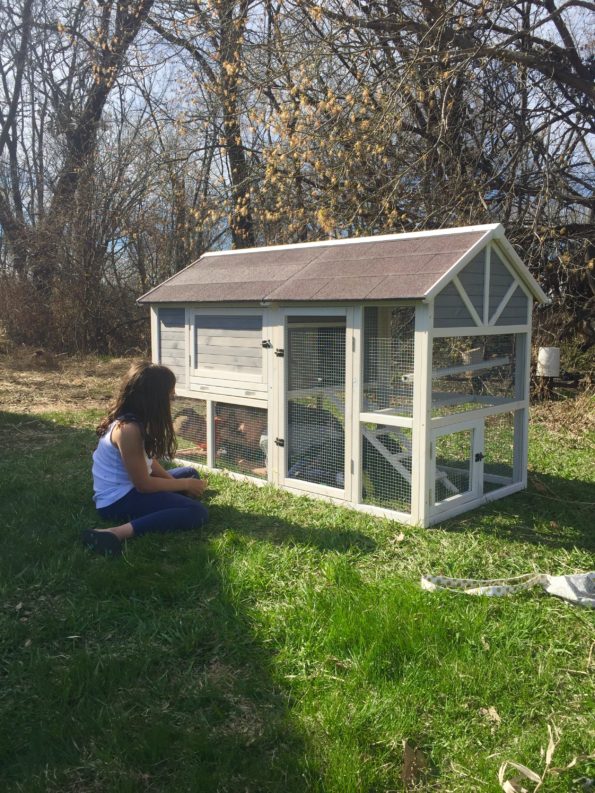 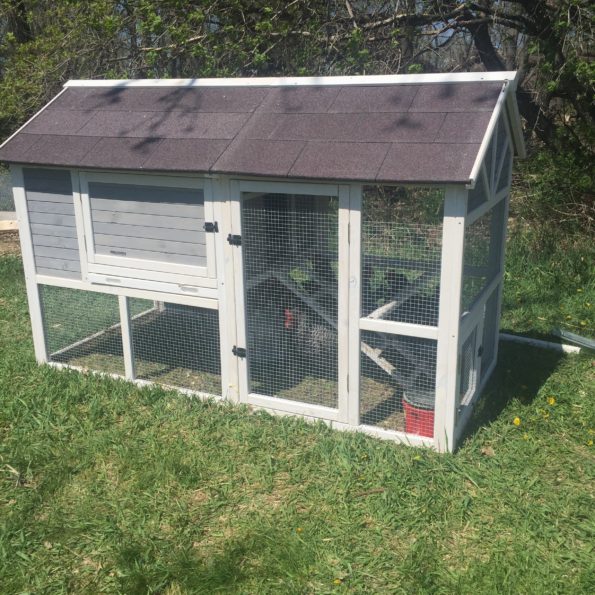 Like I said the coop is adorable but it’s a bit on the small side to hold 8 chickens full time.  Also I knew it might not be the most weather proof shelter come winter. Lucky for us we have an old hog barn on the farm!  Or should I now say chicken barn!!  We moved the coop to the inside of the barn along side one of the old hog doors.  This gives them a more sheltered roosting space while still keeping them contained while inside the barn.  And the hog door opening allows them to move freely to the new chicken run I built.

I didn’t go by any plans on this build – I just rough drafted it on some paper and made it up as I went.  My dad gave me all the materials from his chicken run and then I went through my board pile to use as much existing materials as I could.  I was super lucky not to have to buy many extra materials.  It took about one week to get it all built.  Our family calendar was pretty full so there weren’t many free evenings and I went at a “modified” pace with the “help” of my three year old assistant in the afternoons.    I built the 4 sides separately and then attached the chicken wire.  After that we assembled them in place and added a chicken wire  roof – a process that left me with more than a few cuts because chicken wire is basically the  devil. 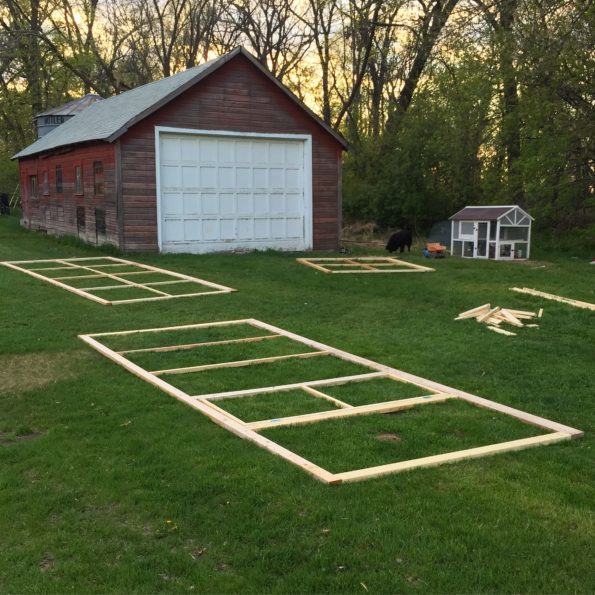 I happened to have the cutest little corbels on hand. I had gotten them for a previous project but they turned out to be too small for that project .  I am so happy I have a horrible memory and didn’t get them returned in time!  They were the perfect touch for my door.  Add a barn door X and a flower wreath and you got me all heart eyes.  I’m pretty sure I saw little hearts in the chickens eyes too. 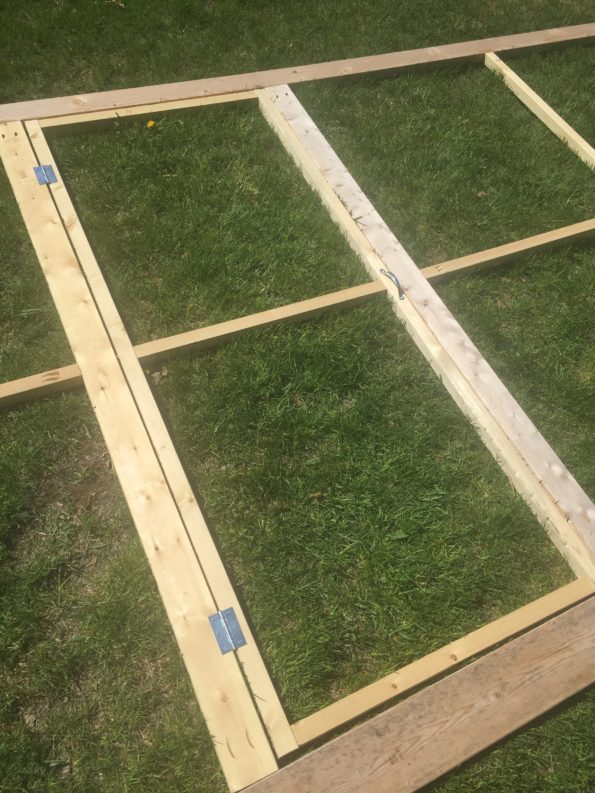 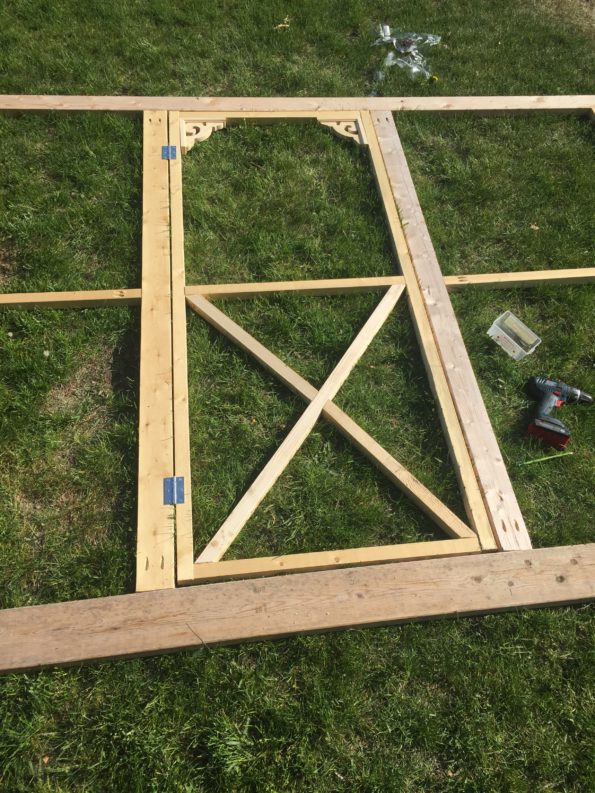 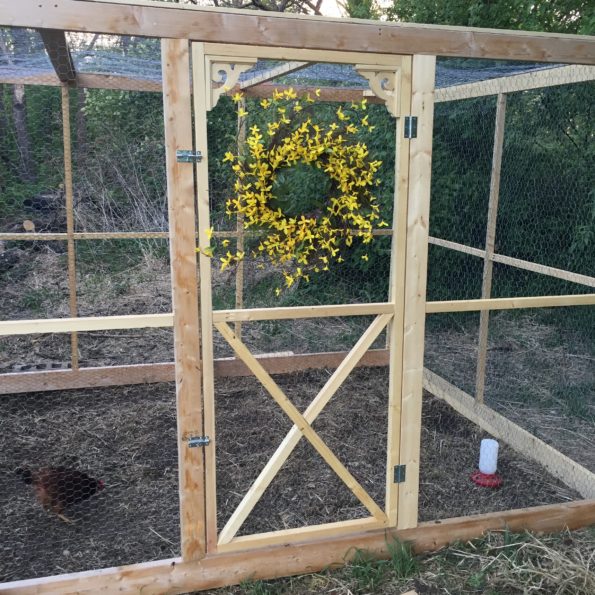 Also my hens requested flowers in cute pots as well. 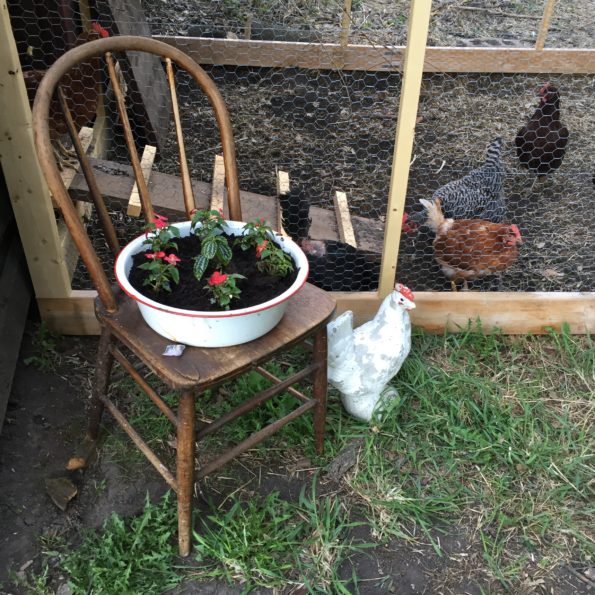 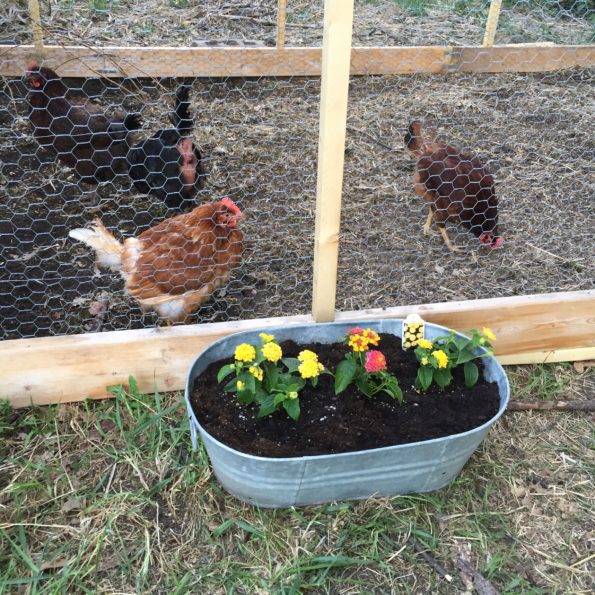 So here it is all finished.  And you know what I’m getting 6-7 eggs a day so I think they like it! 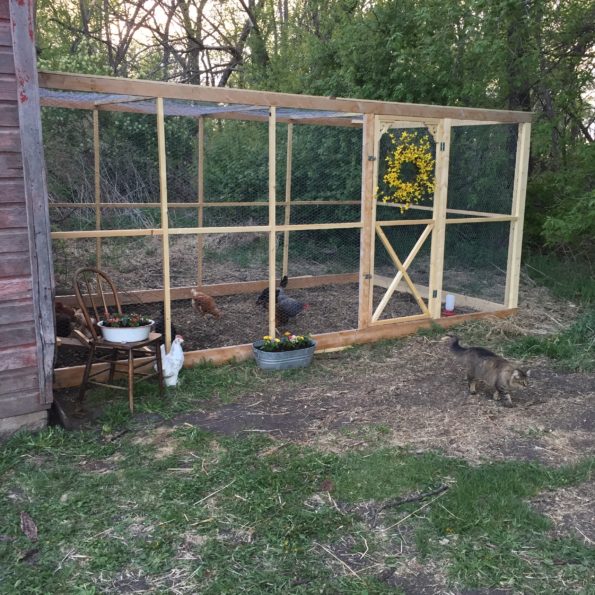 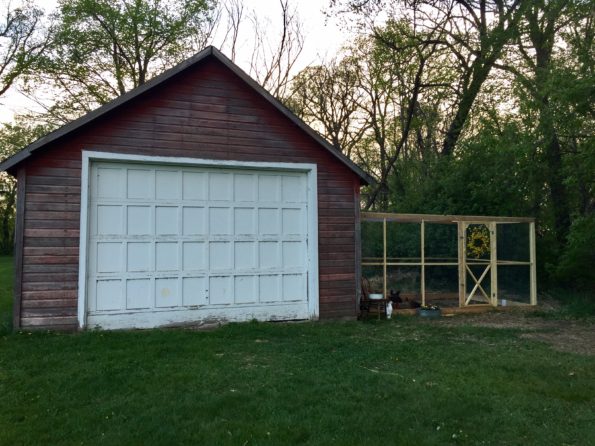 Oh and when we first talked about getting chickens, my husband tried to argue that they would not be becoming pets. Well pets generally have names soooo….let me introduce you to Speckles, Henny Penny,  Lady Glitter Sparkles,  Lucy, Ethel,  Caramel,  Hey Hey, and Shimmer.    My husband did eventually come around to naming them but his suggestions of Tyson, Gold N Plump, The Kernel and Darth Vader did not make the cut.

This first week of chickens has not been without its hiccups however.  On only our second full day with them and before I had started building the run,  I went outside with my three year old to find them sitting not in their coop but on top of it!  I gasped, grabbed the dog who had not noticed yet and put him in the Quonset not knowing how if he would try to attack them (I have now come to find out that he is more interested in the eggs then the chicken).  Next I grabbed Liam and we did our best to herd the chickens back into the coop.  Between some bread bribery and my little herder yelling “chickens I want you in the pen!” we managed to get 6 of the 8 chickens back in the coop.  However the last two stubborn chickens had exhausted by bread supply and were still running around willy nilly.  In  a panic I called my hubby and asked him to please come home because I had chickens out.  My knight in shining armor came right away and  with the help of another adult rather than a three year old, we got the last two wrangled in about a minute flat.

Oh chickens,  I have a feeling this is the beginning of an adventure. 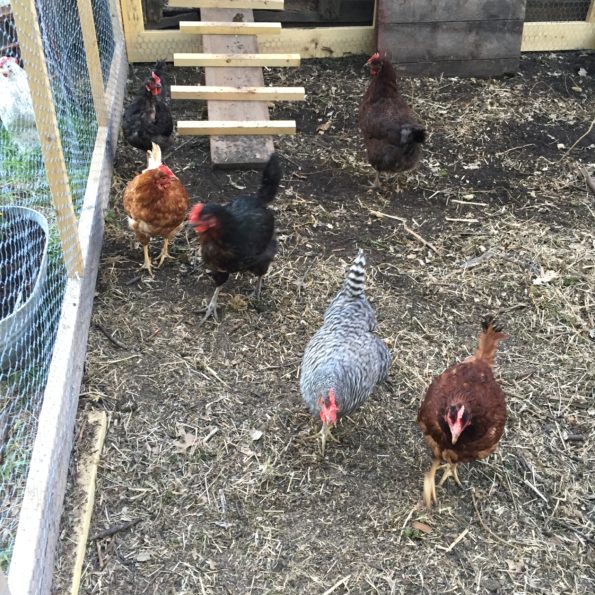 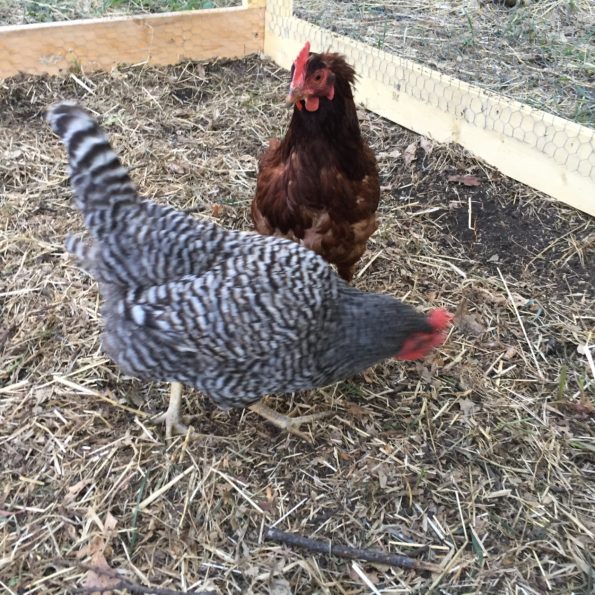 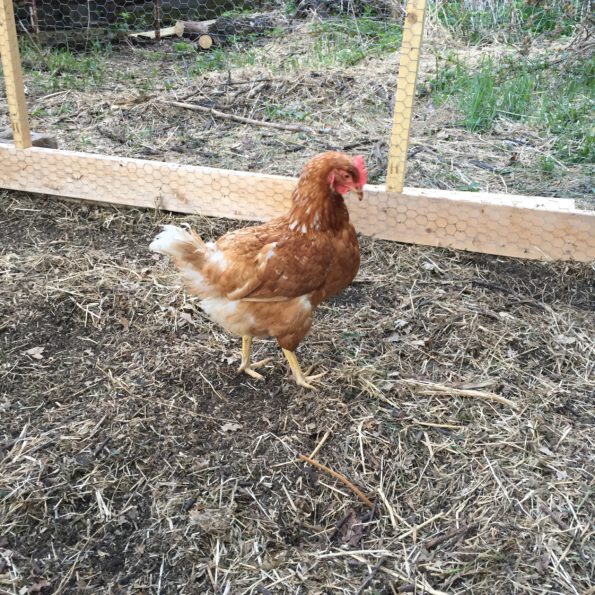 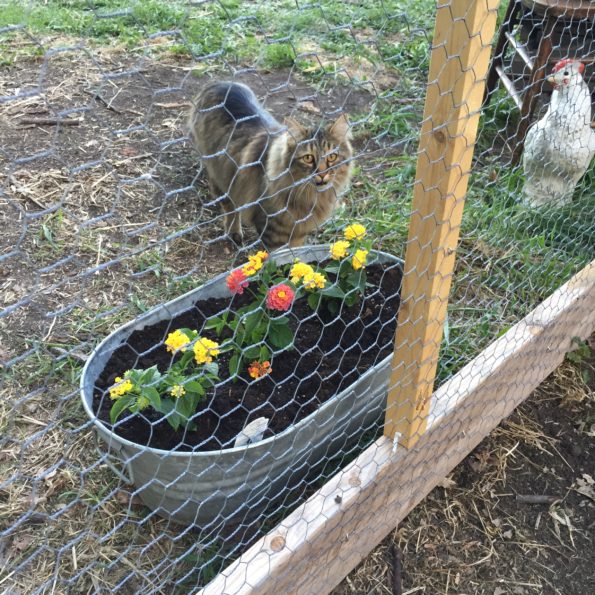