When we first bought our swing set it was supposed to be just a starter one.  A very basic $100 metal swing set from Walmart I believe. Room for 3 swings and a slide.  Fast forward 8 years and we still have that same swing set.  I have to say I’ve been very impressed with it.  It has lasted through 8 years and 4 kids and its still functioning – sorta.  The slide broke last summer so we had to remove that and the spikes that secure the unit have all broken as well.  So now when our older kids swing they have to time it just right so that they are going in opposite directions and the momentum doesn’t flip the structure.  It’s time. It’s time to lay the old girl to rest.

Due to this we started looking at new play structures. We want something wooden, something strong that could accommodate 4 kids.  The more we looked the more realized that swing sets  are expensive! You can easily spend a thousand dollars to get a pretty average wooden play structure.  So as usual we decided to diy it.  My husband’s only request was that we keep things simple.  We live in the country. Our kids don’t need a big fancy swing set – they are surround by nature’s playground – oodles and oodles of trees.  After talking about it, we decided to try and get 4 things accomplished this summer: a good old fashioned tire swing, a tree fort, a basic swing set and some sort of sandbox.  This April we were able to tackle two of these projects.  The tire swing and the tree fort.  Here’s a little picture diary of the fun.

We started with the tire swing.   I swear it was the coldest, cruddiest day in April but the kids were insistent that day.  We had been talking about doing in for a couple months and the snow had melted and by gosh what were we waiting for was their attitude – I swear kids can’t feel cold.

First we set about to find the perfect tree.  You would think that would be easy when I mentioned that we have oodles and oodles of trees. Nope.  You need just the right tree with just the right branch in just the right spot for a tire swing.  We eventually found one with a branch just thick enough.  Here she is. 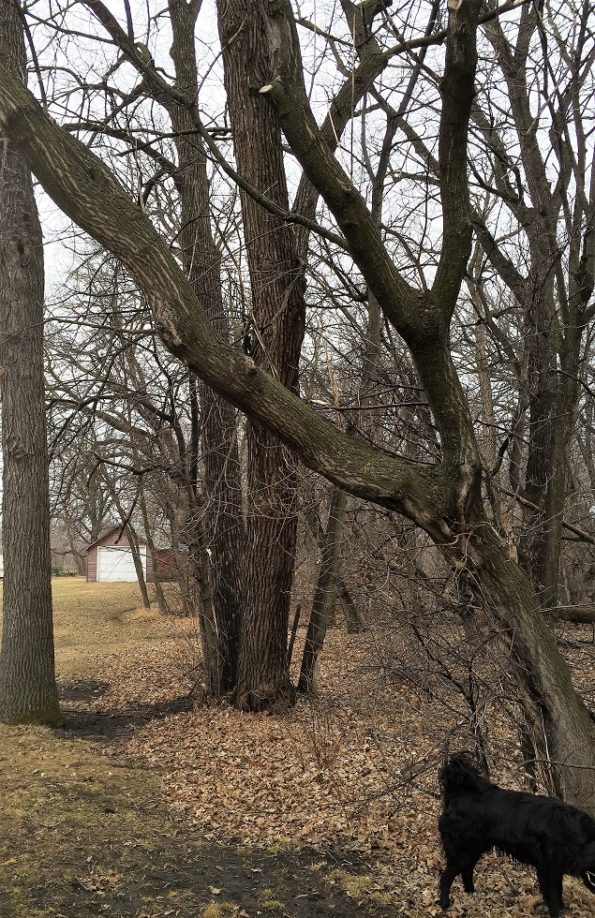 Next time to get it hung up.  We had to purchase the rope but one thing about living on a farm – there always seems to be an abundance of tires.

There was a brief discussion (cough, argument, cough) between my husband and I about what to do first, tie the rope on the tire or the branch.  My husband, being the smart hubby that he is, conceded and did it my way. I will go on the record here and let everyone know that after a  check in with google it was decided that my way was in fact the wrong way and he had to redo it. By this time I was cold and used Liam as my scapegoat to go in and warm up.  😛 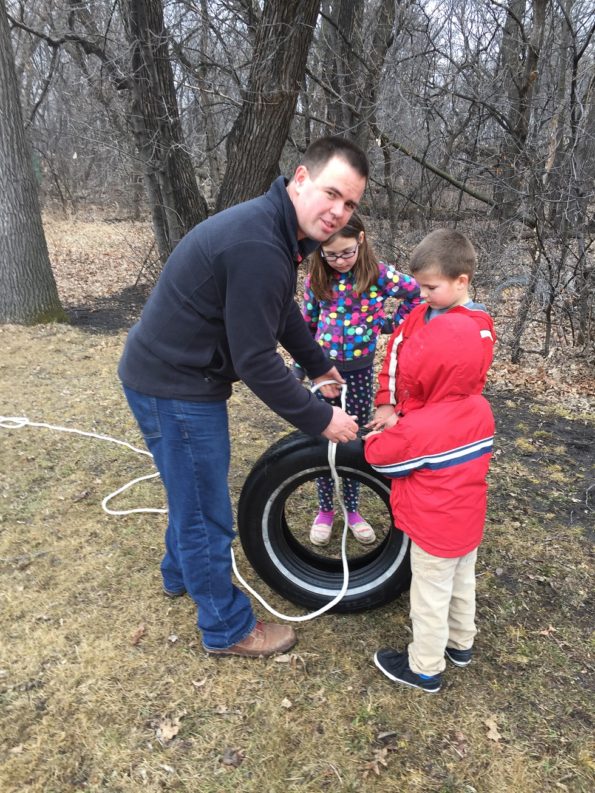 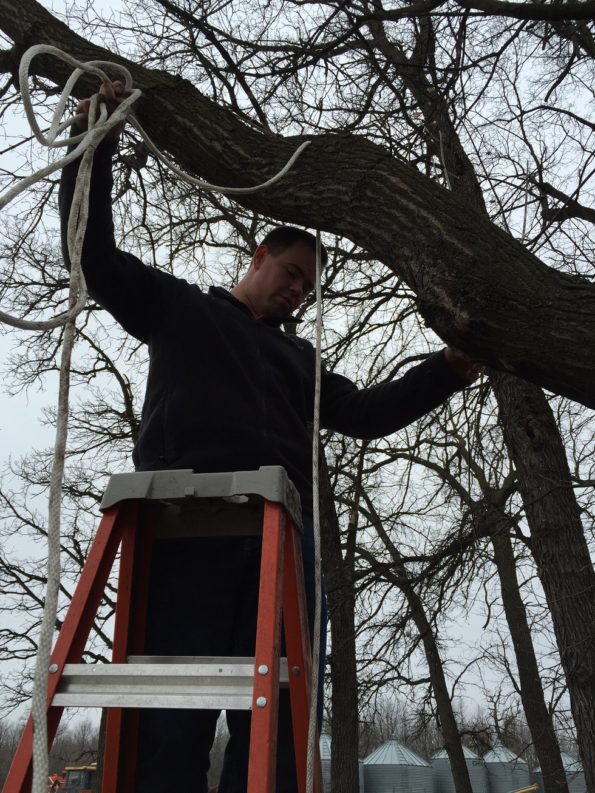 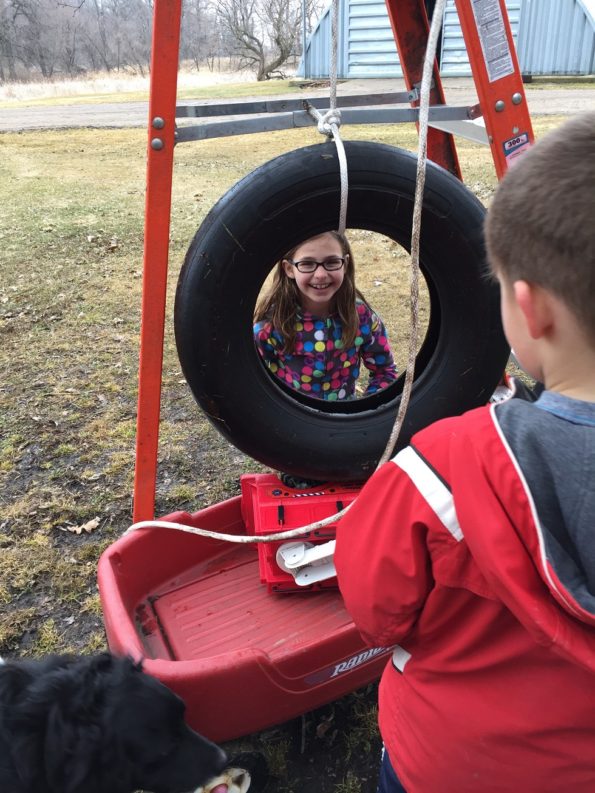 Afterwards he told me it was ok – especially since this was the first time he had EVER known me to be wrong about something. Ok. No. For some reason he didn’t say any of that.  But after it was all said and done we had our tire swing and the kids rejoiced – and fought about taking turns – and then rejoiced some more! 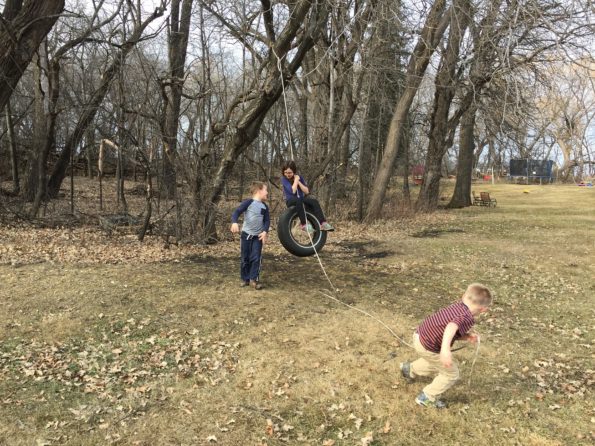 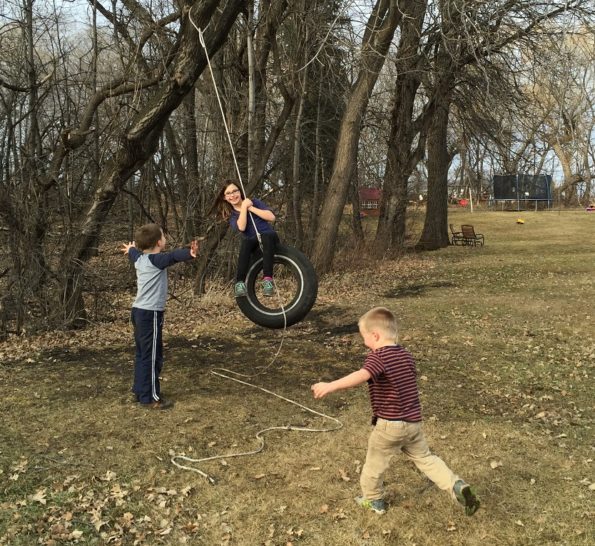 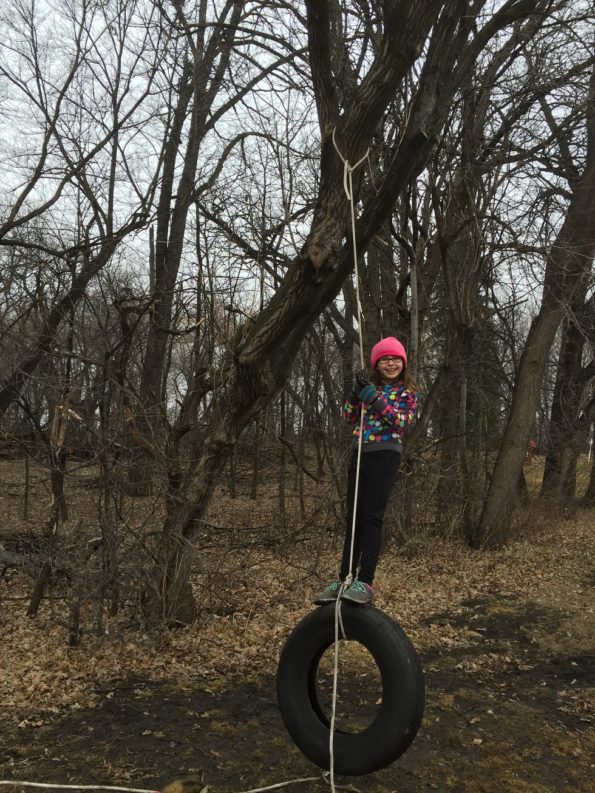 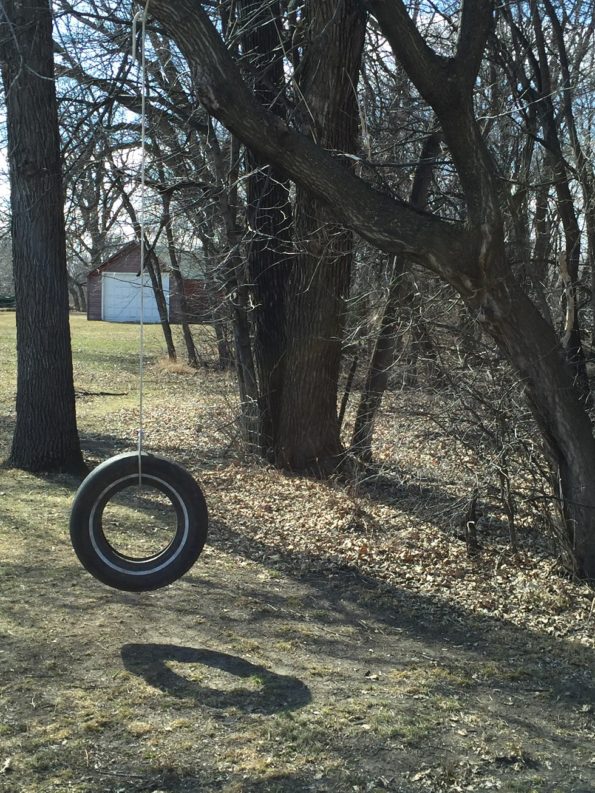 Next it was time to tackle the tree fort.  We were on the tree hunt again and it was just as tricky.  We were looking for a group of trees that were just the right distance from each other so we could build a decent size platform. As luck would have it we found a little group of tree just a few feet from the tire swing. 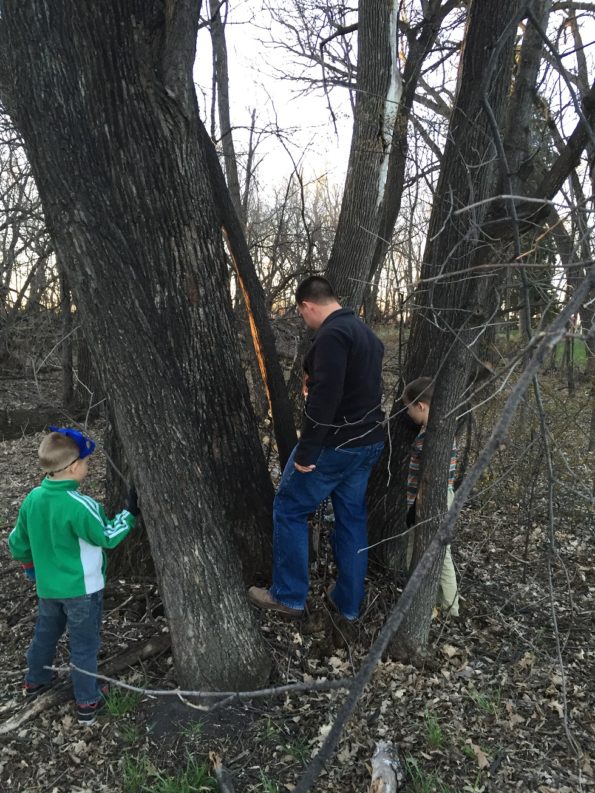 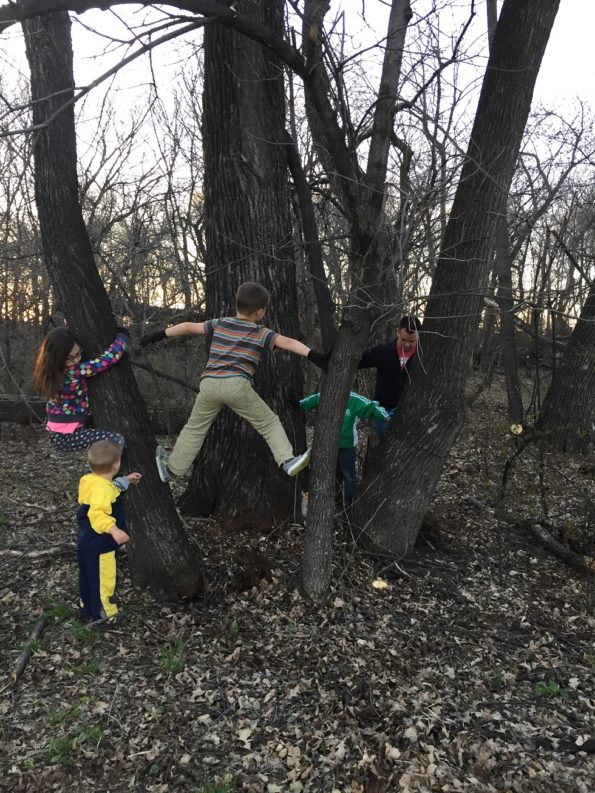 It passed!  Time to get the first board up! 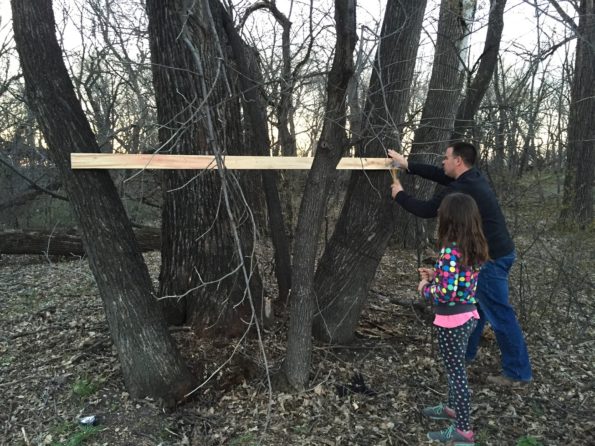 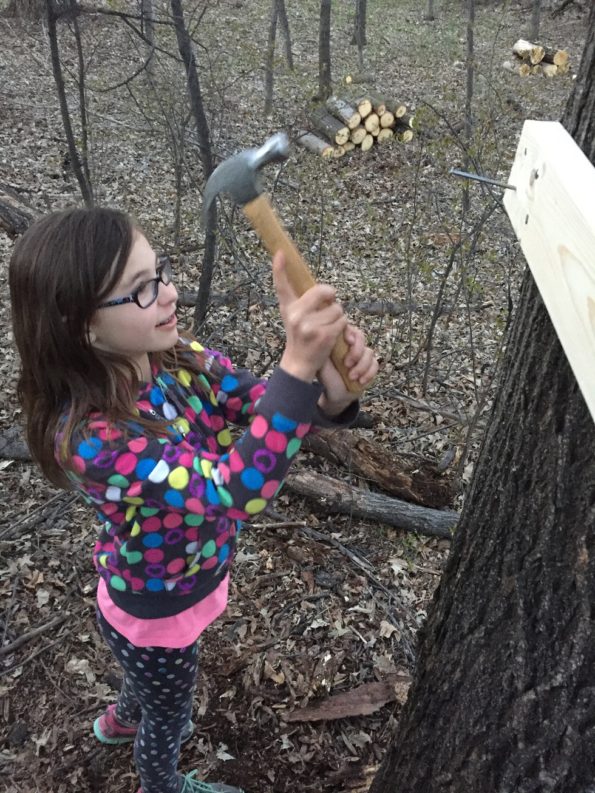 Soon the framing was taking shape. 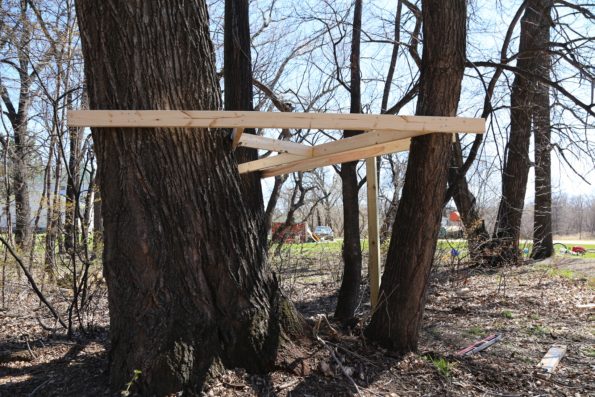 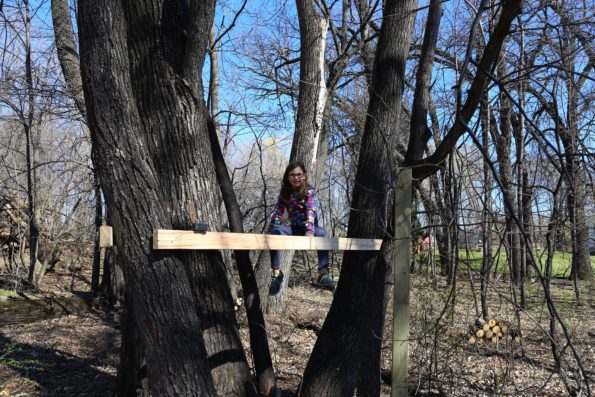 And our helpers were really getting into it. 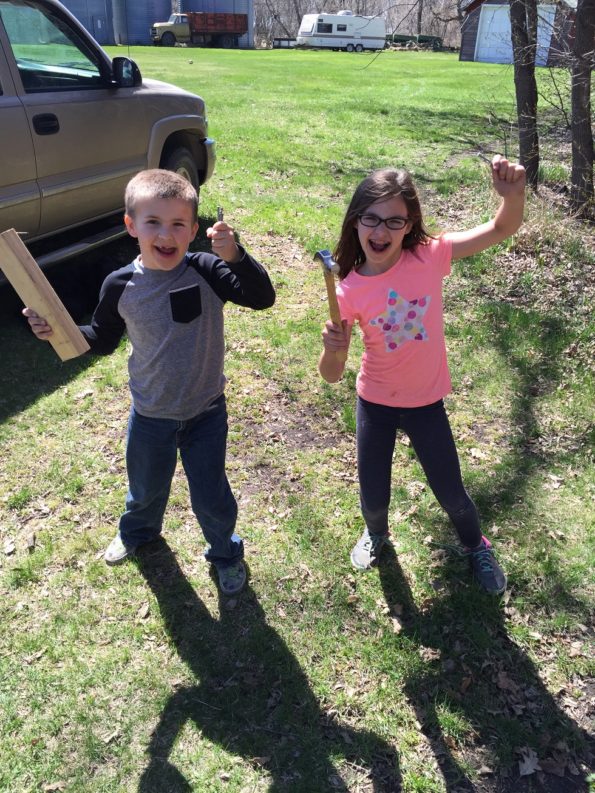 They get their super cool dance moves from me I think – or Elaine from Seinfeld- it’s a toss up really. 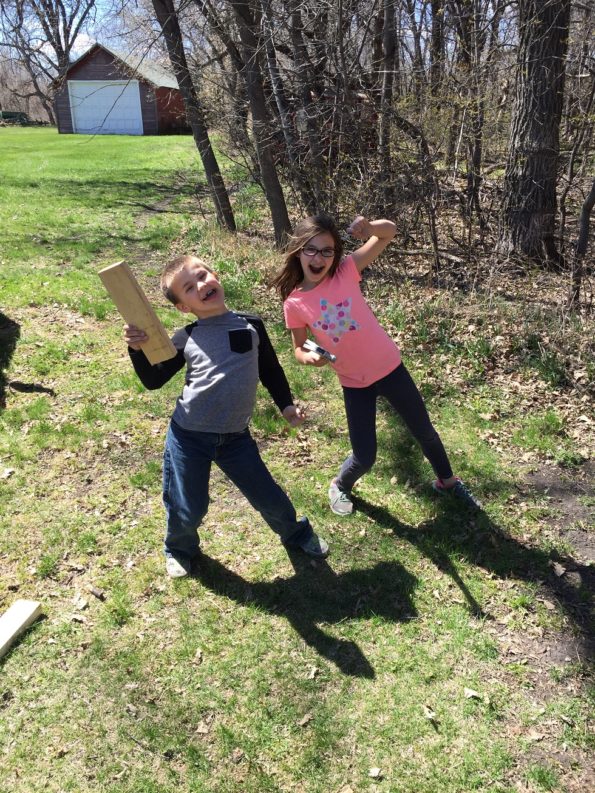 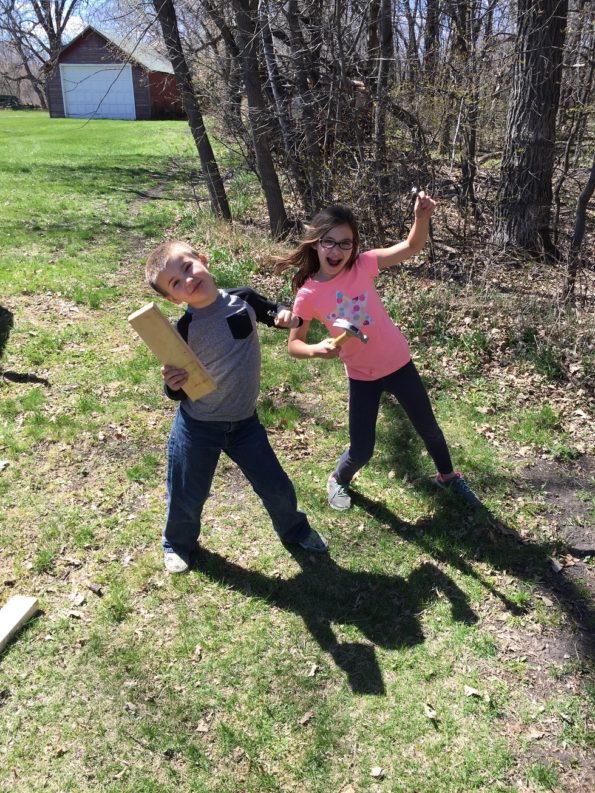 Finally ready for a floor: 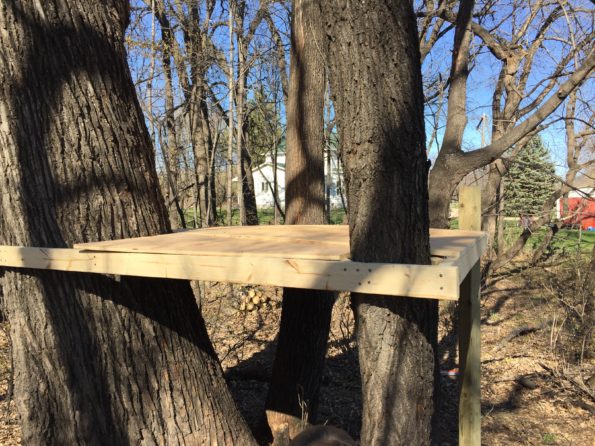 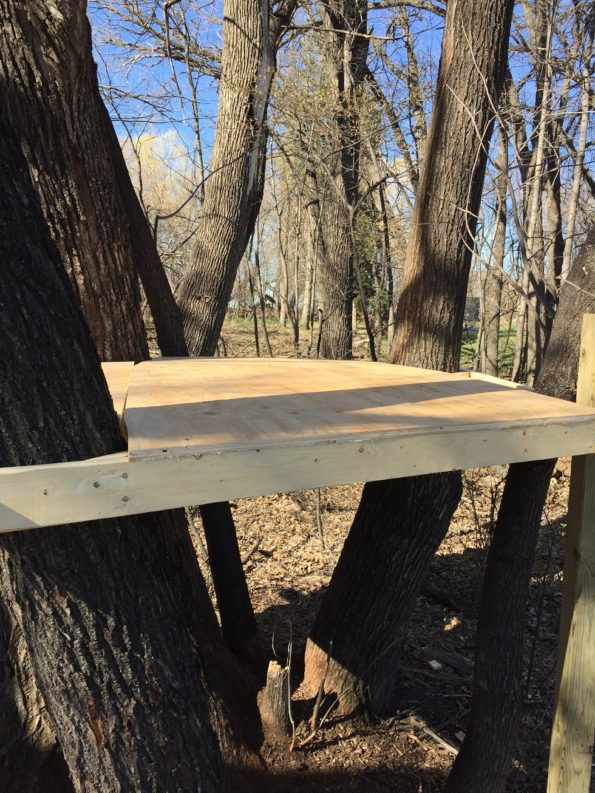 Once the ladder was on there was no keeping them off of it. 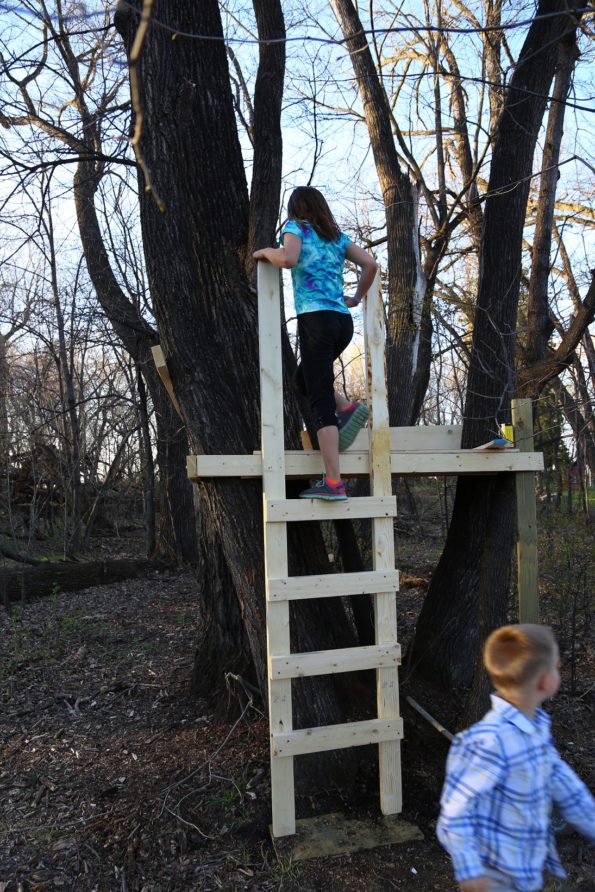 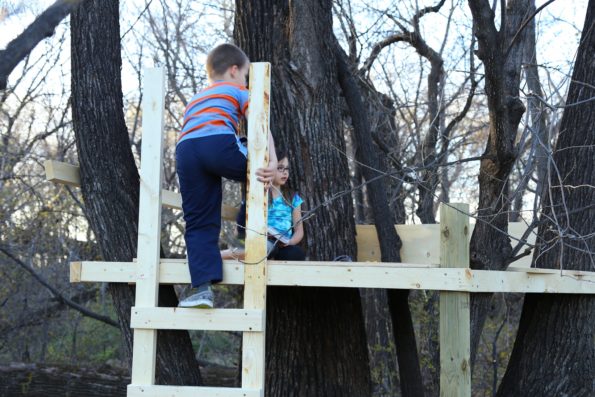 In fact our helpers decided to take a break and let us finish up. 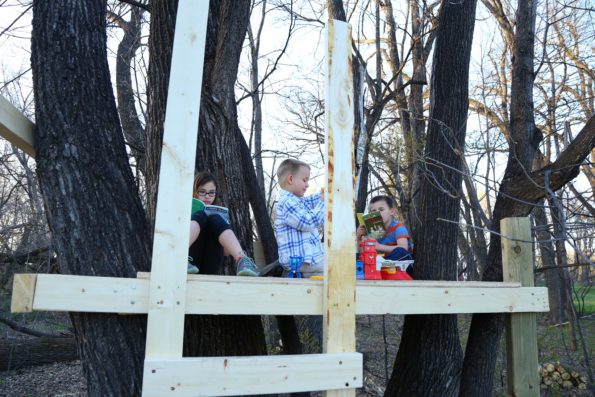 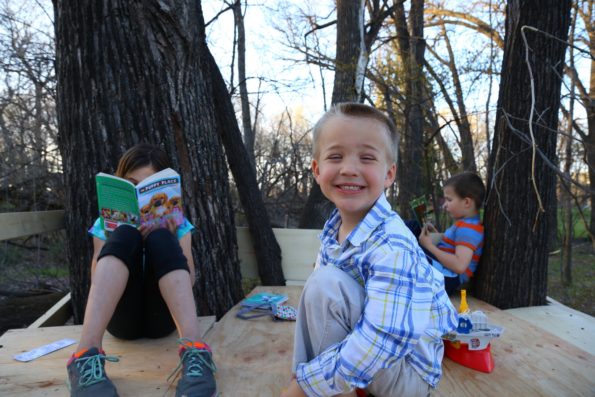 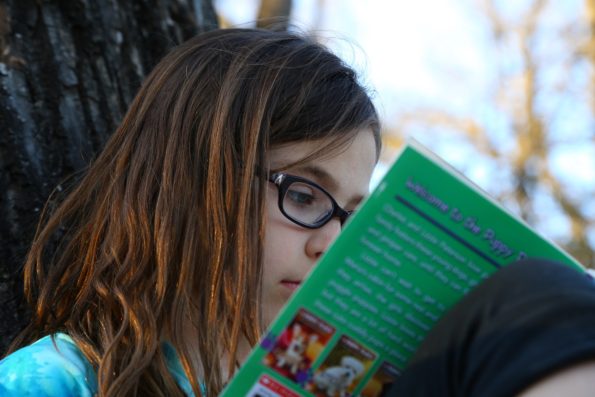 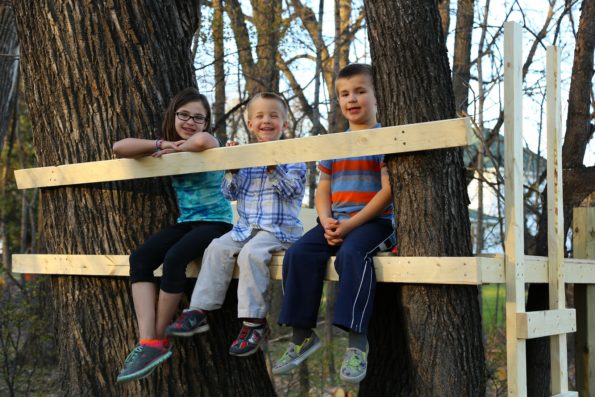 Soon it was all done.  I say soon, but actually I thought it would take like an afternoon and it ended up taking up more like a day and 2 evenings. Turns out building  a tree fort is kind of like building a house – it takes three times as long as you think it will and costs twice as much as you budget for!  Oh well.  It was worth it – building a fort is half of the fun of having a fort, right?!  And now that the leaves are starting to grow – it looks pretty magical and should give them a sense of  privacy for all their secret clubhouse meetings. 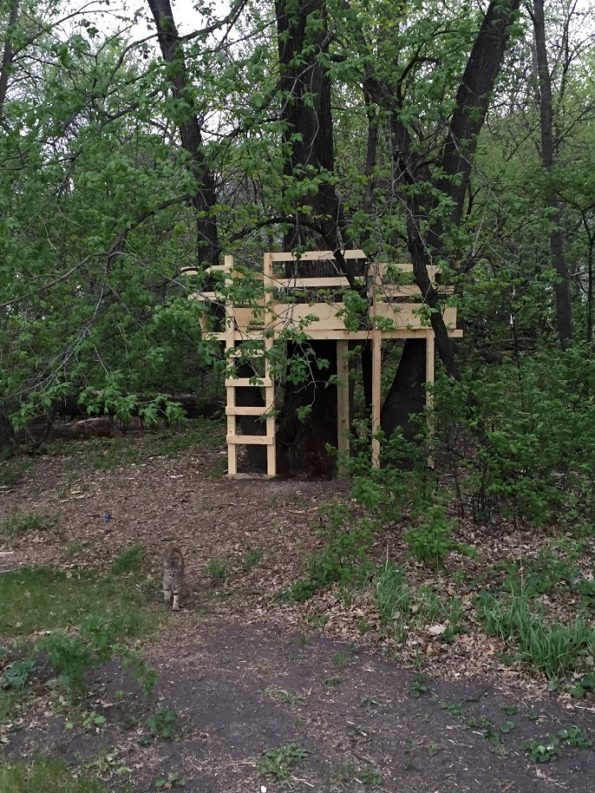 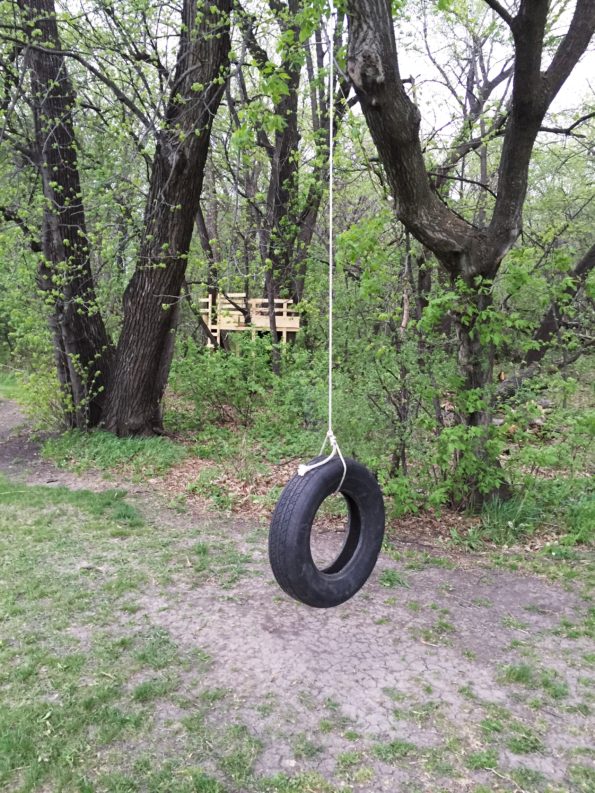 These ought to keep them busy for a while until we can get geared up for the last two projects of the Almen Park and Tree Reserve!  Right now its time for yard cleanup and flower planting.  Next week I’ll give you a little look at a fun planter project I’ve been working on.  Until then, take care everyone!